From the Archives - Riding La Marmotte - Part I

Since 2003, I’ve been an occasional contributor to the Daily Peloton. A few years ago, my stories there vanished due to server problems, and then the magazine went offline altogether. Recently it’s come back up, but all of their archives are gone. I don’t know if these will ever be restored, so over time I will re-post my Daily Peloton stories here. What follows is the first article I ever submitted. It concerns an ill-fated bike race I did in the French Alps a lifetime ago. (Update: Part II now posted here.) 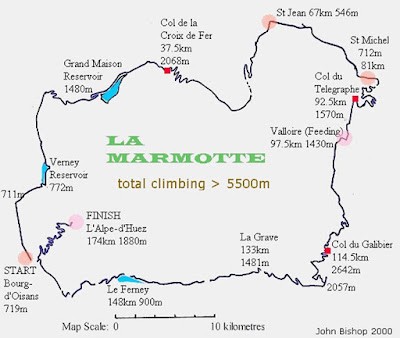 What is La Marmotte?

La Marmotte is a French “cyclosportive” (like a granfondo), which pits riders against each other but also scores each rider according to his or her time. The top riders really race, while the less sportive aim for a bronze, silver, or gold “diploma.” Many of the 6,000+ riders are just hoping to finish. The route is a 100-mile circuit over three of the toughest Alpine passes of the Tour de France, followed by the 8-mile slog up the legendary Hors Categorie Alpe d’Huez, for a total of about 17,000 feet of climbing. La Marmotte has been held for some thirty years. A Belgian journalist told me it’s a rite of passage for any Belgian who wants to call himself a cyclist. It is most popular among the Dutch and the French.

I began bicycle racing at age 11 in 1981, in Boulder, Colorado. From 1984 to 1985 I worked for the Coors Classic bike race. I moved to California in 1987 and continued racing, mostly at the collegiate level, with the highlight being a national title in the team time trial in 1990. Following college I have continued to ride, and recently joined a local Berkeley-area team, East Bay Velo Club. I learned of La Marmotte from my brother Geoff, who lives in Holland. I decided to get as fit as possible this spring and then return to racing for one day.

The Tuesday before La Marmotte I drove, with my mom, my wife, and my 18-month-old daughter to Le Bourg d’Oisans so I could ride Alpe d’Huez, atop which the race finishes. The place was already swarming with cyclists, either training, doing reconnaissance, or simply being seen. It was starting to sprinkle when we stopped just outside of town to unload my bike. By the time I started the ride, it was raining in earnest, which seemed fitting weather for such an epic climb.

The Alps are not like any mountains I’ve ever seen. They are much more abrupt than the Rockies and the Sierras, by which I mean they have no foothills. They’re like cartoon mountains that kids draw, steep and spiky and sharp. After just a few of the 21 switchbacks, I could look down at the town below as though I were in a helicopter. 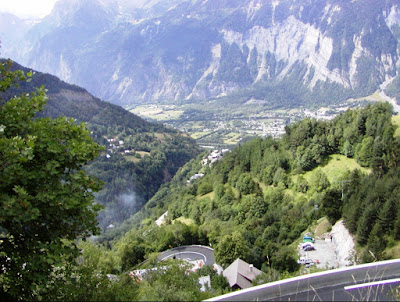 It was very motivating to be on such a famous—and grueling—climb, especially with all the other riders, and I hammered all the way up. My time to where the climbing ended (a few minutes shy of where I later learned the finish line would be) was 47 minutes (ten minutes off Marco Pantani’s record).

On Thursday we drove the whole course so I could ride the descents. (I’d read about how difficult and dangerous these were.) Driving up the Col de la Croix de Fer, we couldn’t believe how long it was, and how steep. No way! I kept thinking. As I later learned, this climb is also Hors Categorie.

At the top it was sprinkling, and very cold, and it took some gumption to get out of the warm car and begin the descent. The first section was very technical, steep with lots of hairpins, but smooth. About halfway down the road passed through some villages and changed to a lousy chip-and-seal surface with lots of loose gravillons, as the signs warned—slippery, coarse gravel. I slid around a bit and learned that you cannot brake or steer when on the loose sections—you have adjust your course beforehand and roll over them as passively as possible. The rain picked up, and the road got slick. Despite the cloud cover, there was enough glare to produce a terrifying effect: when I entered the first tunnel I suddenly became completely blind. There were no lights! I felt like I was falling through space for several seconds before my eyes adjusted.

The next few tunnels were lit, perhaps only because they had sharp curves in them. One tunnel ended right at a ninety-degree turn. This was really one of the sketchier descents I’ve ever done. The idea of doing it in a pack, especially given the range of skill levels represented by an event that draws from totally flat places like Holland and the UK, was frankly pretty scary. I decided to ignore the advice of a Belgian team staying at my hotel, and to do the Croix de Fer good and hard on race day, to get free of as many of the larger groups as I could.

After the descent, the route follows some narrow, flat roads through a couple of towns and then heads up the Col du Télégraphe, a really steep (and arguably underrated) 2ème Categorie climb. It peaks near the town of Valloire, to which the road descends briefly before the start of the Col du Galibier. (The climbs are practically contiguous.) The Col du Galibier, another Hors Categorie, is the most formidable of Marmotte’s climbs. It’s over 11 miles at an average grade of 7%, and peaks at almost 9,000 feet elevation. 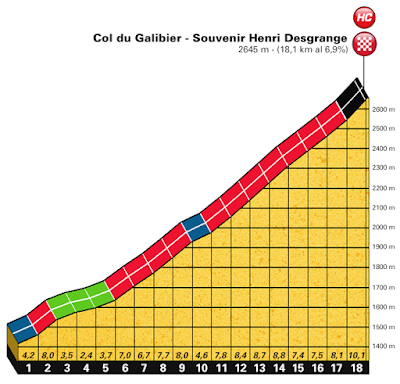 It was very cold at the Galibier summit where, with a sense of resignation, I took the bike out of the back of the car and assembled it again for the descent. The pavement here was very good—clean and fast, though with lots of curves, some of them very tight. After plunging past the summit of the Col du Lautaret, about halfway down, the road straightened out a bit and went through several more tunnels. This brought us back to Bourg d’Oisans and the road up Alpe d’Huez to the finish.

Just driving the course was oddly exhausting. In fact, after a large lunch on Friday at an outdoor café in Bourg d’Oisans, as I idly watched cyclists go by, I was suddenly overcome with dread and began to wonder why I ever wanted to do this thing. It was a pit-in-the-stomach sense that I’d made a huge mistake. (Fortunately, by the time I digested that meal, I was fully amped up again.)

I slept poorly the night before the race and was awake before the alarm. The saintly proprietor of our inn, the Hotel Panoramique, had arranged a pasta breakfast for the riders at 5:15, but I was too nervous to fully enjoy the camaraderie or even the food. My wife and I parked the car a quarter mile from the starting point, a supermarket at the base of Alpe d’Huez. I offered Erin a ride to the start line on my bike, but she wouldn’t have it. I arrived and was routed to the area for numbers 400-2000. I was 908, a relatively low number based on my early registration, but being this far back would mean probably never having contact with the leaders. The throng of riders stretched as far as I could see. 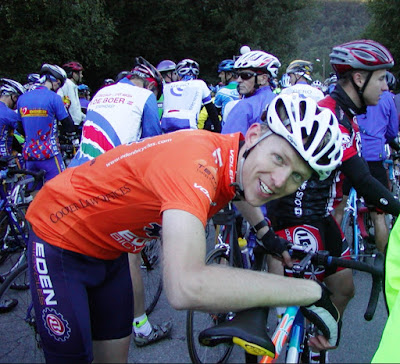 Stupidly, I still had the key to our rental car in my pocket, and when the start time approached, and my wife hadn’t shown up, I began to worry. Without the key, she would be stranded in Bourg d’Oisans, my mom and daughter would be stranded at our inn in Mizoen, and nobody would be waiting for me at the top of Alpe d’Huez. I found some fellow riders willing to hold my bike, and I took off looking for Erin, running through the throngs in my cycling shoes. Thousands of riders and spectators crammed into the parking lot and its feeder roads, and I was despairing. Ten minutes before the start I finally spotted Erin running toward me. (She’d been misrouted.) We got back to my bike with just minutes to spare before the start. You could say I was warmed up.

I lost four minutes just getting past the start line. Once I got onto the open road and began hammering, it was like one of those racecar video games—I was passing people continuously, weaving through them and the countless support vehicles. All the way to the bottom of the first climb, I was in my top gear, doing thirty. At the base of the Col de la Croix de Fer, I could see streams of riders several switchbacks up ahead. How demoralizing. 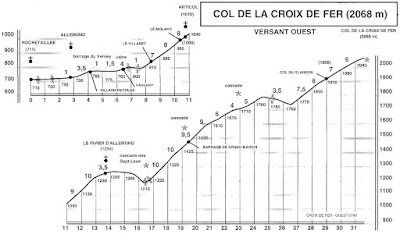 I set a very high tempo all the way up the climb, continuing to pass massive numbers of people. The farther along I got, the higher the caliber of the rider. My legs were very good and fresh, and I was keeping my heart rate at about 162 bpm, 87% of my maximum. (I thought this should be sustainable because during the Markleeville Death Ride in 2001, I was above 160 bpm for 2 hours and 25 minutes.) At the summit of the Croix de Fer, my average rate of vertical gain was 4,260 feet per hour, which cycling coach Stefano Ferrari says is fast enough for a peloton finish in a Tour de France mountain stage. Things were looking up.

On the descent I caught a small group, maybe eight guys, and was relieved to see that they were all great descenders, streaming through the turns without breaking stride. The deep, loose gravel I’d encountered in my recon was gone—it turns out to have been part of a repaving project. The unlit tunnel didn’t freak me out nearly as much as it had the first time. I threaded my way through a couple of grisly crashes but stayed up.

After the fast flat section through St.-Jean-de-Maurienne, I began the Col du Télégraphe alone, after shedding the guys I’d worked with to get across. I continued to pass guys here and there, and couldn’t believe how strong I felt. 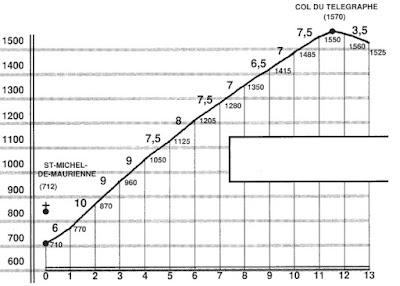 A very lean, compact rider passed me, and—admiring his smooth, consistent form—I considered going with him. Pacing myself and erring on the side of too-easy had gotten me solid, but not brilliant, results in the past. I thought of the real winners I’d known, the eye-of-the-tiger set, who seemed too obsessed with victory to assess the risks of overextending themselves. I rashly decided to get the guy’s wheel.

His pace was smooth and consistent. My heart rate increased a fair bit. I was well aware of being at the redline, but the rewards were immediate. Now we were catching riders at a far better rate, including a wiry young fellow who latched on. I was starting to get a bit concerned about fuel; I’d given up trying to eat an energy bar earlier in the climb and was low on energy drink.

Still, I felt great and stayed with the two riders for most of the rest of the climb. About three fourths of the way up we caught a group of eight. I took this opportunity to scale back my efforts, letting the two go and staying with the small group to the summit. By this time, my bottles were completely empty, but I knew we had the first feed zone in just a few miles, after a short descent to Valloire at mile 60. The race seemed to be going just about perfectly: my heart rate was back down at a sensible 162 bpm, my average speed was 16.7 mph (with 4,000 feet of future descending banked), and here I was in a small group of very elite looking guys, exceeding my own expectations.

There was just one problem: it was here that I cracked.

Check back next week for the frightful second half of my heart-wrenching tale: