I have had mixed reactions to my vlogs. One reader indicated that I disparage the vlog format so much that he feels too self-conscious to view a vlog, even mine. Another said that he liked my last post, but didn’t want to watch the vlog version because he would find that embarrassing—as in, he would be embarrassed for me if he watched it. Look, here’s the thing. A friend of mine who’s a successful blogger recommended that I always provide a vlog option, and I trust his advice, hence the vlog below. If you think he’s right, well then, click Play and enjoy. Otherwise, please don’t be embarrassed. Just scroll down for the text. (Or hit Play, close your eyes, and pretend it’s a podcast.)

I am no expert about American football. That might make me seem like a poor authority to consult about the Super Bowl. But most Americans are far too steeped in football lore to be of much help to a foreigner. Ask almost any football fan what a “down” is, and you’ll get an answer like, “You know, a down. Like, third down and six, that kind of thing.”

Since albertnet is a truly global blog, with 11% of my pageviews from Russia and 7% from Hong Kong, I thought I’d help the rest of the world understand the whole Super Bowl phenomenon. (I know, I should have posted this well ahead of the game … I just got busy. At least this will help you process what just happened.)

Ooh, you caught me. I didn’t know so I just guessed. I was kind of hoping nobody would try to convert the roman numerals. The Super Bowl started in, like, the ‘60s? So we’re at, like, number 55? I don’t actually know. Sorry.

Is Super Bowl one word or two?

It’s two, but most football fans probably aren’t very particular on the spelling (of this term or any other). Just don’t call it the Super Bowel. They might think you’re a wise guy or something.

Has football significantly contributed to the study of linguistics?

Somewhat. It has given us a couple of new heteronyms: offense and defense. In normal usage, these are pronounced “uh-FENCE” and “de-FENCE.” In football, it’s “OFF-ence” and “DEE-fence.” More on heteronyms here.

Does the whole country watch the Super Bowl, or just the states with teams in the game?

The whole country watches, because regional differences aside, the game is just plain American so we’re all emotionally invested in it. I supposed it’s kind of like how France follows the Tour de France even though a Frenchman hasn’t won it since 1985.

What’s the best thing about the Super Bowl?

This is a tough question. Most of the anecdotal evidence I’ve accrued points to the tasty snacks fans get at Super Bowl parties, but lots of people do also love the commercials. I think everyone agrees the game itself doesn’t rank very high because, oddly enough, it’s usually a blowout. 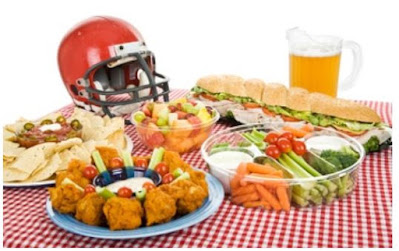 Can everyday fans watch the Super Bowl in person?

Heavens no, you have to be practically royalty to afford a ticket, and that’s during a normal year. This year, due to the COVID-19 pandemic, you have to a) be a healthcare worker or b) have naked pictures of God. The promoters have greatly reduced the number of fans they’ll allow in the stadium.

Will this game be a COVID superspreader event?

Oh, very likely when you consider all the Super Bowl parties obstinate fans will insist on hosting across the country. But nobody will know for sure for a couple more weeks.

The halftime shows are designed to be amazing spectacles, but just like big-budget superhero movies they’re almost never any good. About the most this show ever accomplishes is some overwrought scandal, such as when Janet Jackson’s boob popped out of her outfit, or when M.I.A. flipped off the audience and was subsequently sued for $16.6 million for “tarnishing the [National Football] League’s goodwill and reputation.” I guess that’s pretty amazing. 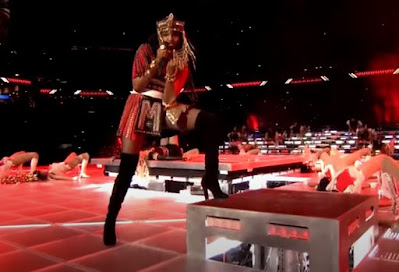 Regarding this M.I.A. lawsuit: did the NFL have a valid point?

The NFL doesn’t exactly have a squeaky-clean track record. For one thing, they have come under fire for tolerating domestic violence by their players, as described here. They also have a long history of turning a blind eye to rampant concussions, and as detailed here took great pains to block research on the topic. Their fans, being remarkably tolerant of all this, should be able to handle getting flipped off, and as far as I’m concerned the NFL has tarnished its own goodwill and reputation. M.I.A., in her defense, rightly mocked the NFL for claiming to be wholesome.

Is the football itself really made out of pigskin?

Not anymore, but in the early days it was made from a pig’s bladder.  Details here.

Who is playing in the Super Bowl this year?

I recently learned that it’s the Kansas City Chiefs and the Tampa Bay Buccaneers.

What is a buccaneer?

Buccaneers were basically French pirates, except that they were licensed by the British government, who, according to Wikipedia, “legalized their operations in return for a share of their profits.” In some cases the Royal Navy actually assisted them. Wikipedia goes on to say, “Among the leaders of the buccaneers were two Frenchmen, Jean-David Nau, better known as François l’Ollonais, and Daniel Montbars, who destroyed so many Spanish ships and killed so many Spaniards that he was called ‘the Exterminator.’”

Is that a fitting image for a sports team?

Perhaps not, but then, there has been controversy about the name “Chiefs” as well.

When’s the last time your local team made it to the Super Bowl, and were you excited?

Dude, your San Franciso 49ers were in the Super Bowl just last year! Pull your head out!

Wait, seriously? I must have known that. But really, this kind of thing barely registers with me. Not all Americans are rabid fans. Where popular ball sports are involved, I always root for the opposing team, ever since the San Francisco Giants won the 2012 World Series and fans ran amok, even setting a city bus on fire. Especially given the pandemic this year, I’m relieved that neither the 49ers nor the Raiders are in the Super Bowl.

You are aware that the Raiders are no longer in Oakland … right?

Wait, what? Oh, yeah … I guess I remember something about them moving to … Vegas, was it?

Originally the readers asking you these questions seemed to be from Europe, but those last few were apparently from testy locals. What’s up with that?

I’ll take questions from anybody, or nobody.

How many Americans typically watch the Super Bowl?

According to Statista, around 100 million Americans watch the big game on TV. Last year it was 99.9 million, and viewership peaked at 114.4 million in 2015. Here’s a graph. 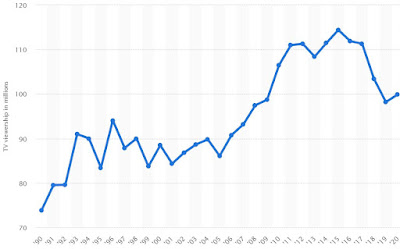 How can you be so uninterested in a championship game that’s this popular?

To be honest, I’m a little bit disturbed by any sporting event that relies heavily upon tribal impulses for its excitement. (This is not limited to football or to America; consider soccer hooliganism in England, which according to this study is “thought to reflect expressions of strong emotional ties to a [soccer] team, which may help to reinforce a supporter’s sense of identity.”) I air my misgivings not as an outsider, but as somebody who has not only tasted but deeply quaffed the thrilling feeling of team identification.

In 1986, for some reason my brother Bryan and I, both still living in our hometown of Boulder, Colorado, decided to watch our home team, the Denver Broncos, in the AFC Championship Game against the Cleveland Browns. As described here, “Broncos quarterback John Elway, in a span of 5 minutes and 2 seconds, led his team 98 yards in 15 plays to tie the game with 37 seconds left in regulation. Denver won the game in overtime by making a 33-yard field goal.” Bryan and I were elated. We jumped to our feet and did dual high-fives in the air (no small feat for two non-gymnastic cyclists). Then, as the aerial camera pulled back to show the frankly ugly Cleveland Municipal Stadium on a dull winter day, the announcer said something dramatic like, “With this devastating loss, the fans in Cleveland will head home to bleak, meaningless lives, with nothing left to live for.” I shook my head and in a very self-satisfied way reflected on the abysmal, low state of the Clevelanders, and was relieved at knowing myself to be so obviously superior to them.

Then I thought, wait a second! I don’t even like football! I’ve never even been to Cleveland! It was a real wake-up call, and I thought about it again five years later when I read St. Augustine’s Confessions (in the original Latin, if you must know), particularly this passage concerning a young man who, dragged against his will to the gladiatorial games, is determined not to be caught up in them:

A great roar from the entire crowd struck him with such vehemence that he was overcome by curiosity. Supposing himself strong enough to despise whatever he saw and to conquer it, he opened his eyes... As soon as he saw the blood, he at once drank in savagery and did not turn away. His eyes were riveted. He imbibed madness. Without any awareness of what was happening to him, he found delight in the murderous contest and was inebriated by bloodthirsty pleasure. He was not now the person who had come in, but just one of the crowd which he had joined, and a true member of the group which had brought him… He looked, he yelled, he was on fire, he took the madness home with him so that it urged him to return … taking others with him.

Now, don’t get me wrong, I’m not actually afraid of becoming the kind of rabid fan who gets so worked up he celebrates “his” team’s victory by torching a city bus. But any temptation to submit to this hardwired tribal instinct gives me pause.

Is it true that there is a spike in domestic violence every year during the Super Bowl?

What’s the deal with cheerleaders?

Unlike European sports, American sports feature skimpily clad women dancing around to celebrate their team. I suppose this simply provides a welcome spectacle for anybody who has lost interest in the game.

Look, here are some now! 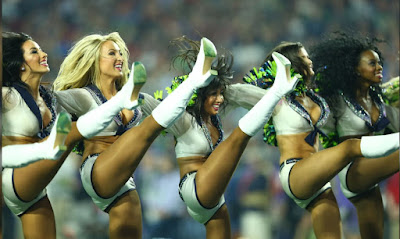 Is it true concussions are a serious problem among high school cheerleaders?

Boy, you really are a buzzkill, aren’t you?