From the Archives - It IS About the Bike

Seven or eight years ago, the iconic American bicycle frame company Serotta went out of business, and there was some journalistic buzz about its legacy. A friend suggested I write a tribute based on my own love of these bikes. The problem is, I’d owned only one Serotta, and very briefly at that. I’d bought it used, and it had been a broken frame repaired by a guy who was just learning how to braze steel framesets. His novice status was emphasized when his repair failed on literally my first or second ride. So my time with the Serotta wasn’t exactly a love affair … not even a fling, really. 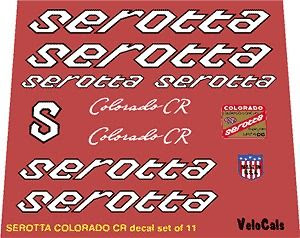 Could I have written about Serottas from some other perspective? Like, the reputation the brand had among my racer friends and me? Well, we did affectionately call them “Scrotums” but that wouldn’t really do for a retrospective piece. So I wrote the sprawling story that follows, which is far from the concise, zippy, fawning paean that was called for. I knew my essay was a doomed effort, almost an f-you to the editor, who didn’t even bother to formally reject it. He just ignored it, perhaps rightly so. (In the event, this eulogy would have been a misstep anyway, as Serotta is back in business.)

Not knowing what else to do with my story, I sent it to the Daily Peloton who ran it in two installments. Oddly enough, their new(-ish?) editor assumed—based on my name—that I was female. That was a bit embarrassing … look: 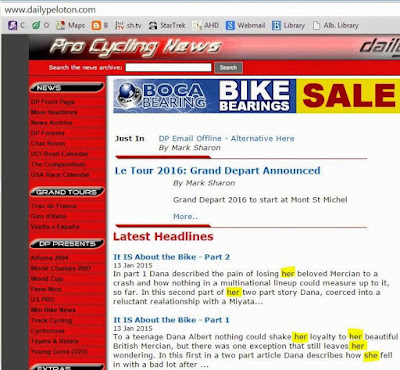 (I describe the lifelong indignity of having a girl’s name here.)

Anyway, since Daily Peloton’s servers crashed a few years ago and all my articles there were lost, I’m gradually reposting them on albertnet. Read on for my not-really-about-a-Serotta article.

It was the bicycle equivalent of sensible shoes: a Miyata 310, the second bike I ever owned. I first saw it in a catalog, upstaged by the Team Miyata and Pro Miyata that were obviously out of my league. The 912, Miyata’s entry-level race bike, was almost within my reach, which gave me pangs. But I was resigned right off to the 310, which I only dared hope I’d get for my 12th birthday. I still remember the catalog description: “Offers the looks and the handling ease of the 912, with a price to fit most budgets.” It cost $265, in 1981. Since my choices were effectively limited to the one bike my mom would pay for, it was really she who chose it. And it was just the beginning. 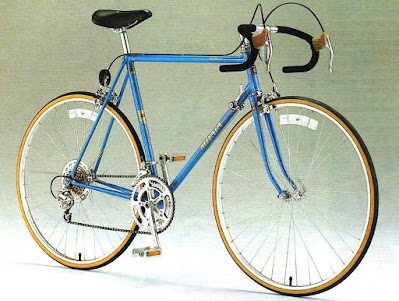 When I outgrew that bike I sold it, ponied up my life savings, borrowed $250 more from my dad, and bought my first real racing bike. This was my friend Nico’s Mercian. It was practically new. He’d just gotten picked up by a team that gave its riders bikes. Imagine! Mere teenagers getting free bikes! Never mind that these were used bikes (also Mercians) that the senior team had ridden the year before and handed down to the juniors; the cachet of a free bike surely overcame that. Of course, Nico’s old Mercian being the only pro-quality road bike I had the chance to get cheap, I didn’t exactly choose it, either ... no more than I had that Miyata. 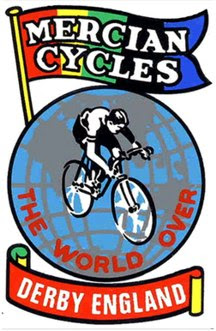 The Mercian—my Mercian—was a beautiful bike, possibly the most beautiful I’ve ever owned. (That’s saying a lot: I’ve had over 20 road bikes.) The color was officially called “champagne pearl,” but it was more like—what? Ginger ale? Not exactly. It was the color of a young gazelle, but sparkly. The lettering was pure white, whiter than snow, whiter than the cleavage of a Shakespeare heroine. I loved that bike. Here’s the best photo I have of it. See the guy with the Shaversport jersey and no number? That’s Nico, in the Red Zinger Mini Classic race leader jersey, on the Mercian before I owned it. I’m two guys to his right (#62) on the blue Miyata 310 with the clamped-on water bottle cage. 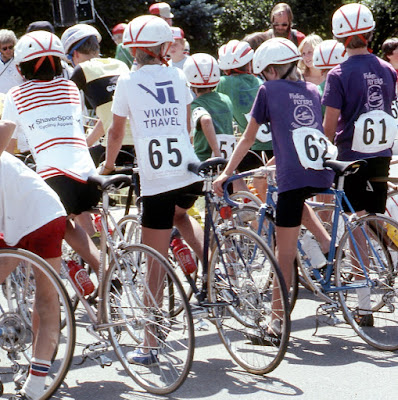 I’d had the Mercian for only a couple of months when, one night out with Nico, enjoying the warm and the dark and the freedom of riding bikes, we swung into a parking lot that ended up being a lot smaller than expected. I rammed that poor bike right into a curb. I flipped over the bars and landed on grass and was unfortunately totally unhurt. I say “unfortunately” because when I saw that I’d bent my frame—so that the paint on the top tube cracked, and the downtube crinkled—I wished I was dead.

Did my brothers comfort me? Of course not. There were three of them: the twins, Geoff and Bryan (three years older than I) and Max (a year and a half older). They taunted me about my wrecked bike: “Those MUR-shans”—my brothers mispronounced it just to piss me off—“are made with pins, which puts a strain on the tubes and weakens them. The right way to hold the tubes in place is with a jig, but at the MUR-shan factory they use pins because they’re lazy. Any other frame would have handled that crash just fine.” I got so sick of hearing this explanation ... they wouldn’t shut up about it.

Looking back, I can see why my brothers gave me a hard time: it’s because I had a cooler bike than they did. Never mind that I paid for it myself. I’d earned the money through one odd job after another: working for Eco-Cycle (the curbside recycling pickup program); cleaning Laundromats; standing in front of a grocery store handing out flyers for Fiske Planetarium; blanketing the neighborhoods with flyers for Save Home Heat, a solar energy company; installing pipe insulation; timing sailboat races at the Boulder Reservoir; and helping my friend’s mom deliver newspapers. This mattered nothing to my brothers. I had the cool handmade English racing bike that they didn’t, and this was an act of insubordination.

(Would my brothers agree, today, with that last paragraph? Who cares! This is my story ... if they don’t like it they can write their own.)

Finally, to shut them up, I wrote a letter to Frank Berto, the head gearhead at Bicycling magazine. (Among bike nerds, he was something of a celebrity.) I described my size and weight, the speed of the crash, the fact that I hit the curb head-on, and so forth, and asked if the pins caused the frame failure. My brothers swiped the letter and played keep-away with it, reading snatches as they went. Of course they preferred paraphrasing what I’d written: “As I hit the curb, my slight but highly-muscled build holding the bike in a perfectly perpendicularly fashion, a grimace spreading over my face,” etc. It wasn’t enough to mock my bike. They had to mock my prose as well, by resorting to the cheap trick of pointing out absurd descriptions and grammatical errors that didn’t actually exist in my letter.

Well, they could laugh all they wanted because I knew that letter would eventually ensure my vindication. Perhaps they fantasized that I’d get some cheap form letter apologizing that due to the high volume of letters received, not all could be published, etc.

Instead, I got a letter back from Frank Berto himself! I can’t remember exactly how he put it, but his letter conveyed that of course my brothers were full of shit, and that pins are perfectly fine, and that any bike with a light tubeset like that would have bent just like mine did. As an extra bonus, the secretary at “Bicycling” added a little note saying, “Our editor was very impressed that someone your age could write so well. He said, ‘Sign that boy up!’”

Well, I really rubbed my brothers’ noses in it, which felt great. But antagonizing my brothers may have been a poor strategy long-term, as I’ll get to in a bit. The immediate problem was: I had no bike to ride. Dave Whittingham, the manager of The Spoke—the bike shop that imported Mercians into the U.S.—told me Mercian might be able to fix my frame for a couple hundred bucks. Thus began an interminable cycle of my asking him about it every time I went into the shop, which was a lot, and him responding with a hangdog look and an apology. I still can’t figure out why he kept stringing me along with false hope.

Short term, I borrowed another frame from Nico. This was a rose-colored Cinelli. I can’t remember where he got it or why he had it. Looking back, it was probably the coolest, most iconic frameset I ever possessed. It was very old school—and in fact, just plain old. The head tube logo wasn’t the winged “c” they use now, but an elaborate coat-of-arms deal. The lettering was ornate and blocky and vaguely Roman, like something engraved on the tympanum of a coliseum. 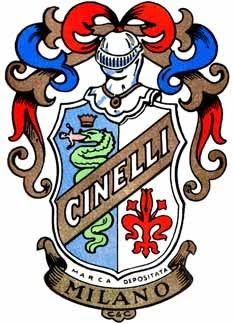 The frame was heavy: probably made of primitive Columbus straight-gauge tubing, from the days before butted tubes. This frame may have even dated from the early days when Cino Cinelli himself was in charge and his company produced only 350 frames a year. I had worshipped these bikes for years … in fact, two or three years before, I’d worn a Cinelli cycling cap 24x7. Check it out: 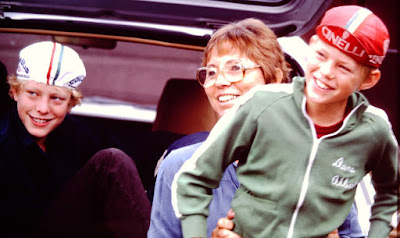 Alas, all the old-world class and pedigree in the world couldn’t make that Cinelli ride as well as my old Mercian. I hate to say it, but the Cinelli was sluggish.

After a few months Nico wanted his frame back and there was still no progress on the fool’s errand of getting the Mercian repaired. It was time to buy a new frame. So my brother Geoff, who had earned a fortune washing dishes at the Flagstaff House restaurant, said he’d loan me the money for a frame if and only if I bought another Miyata. What was I to do, having sassed him with the Frank Berto letter, thus putting myself at his mercy? Tune in next week for the tragicomic denouement of this tale.