Ear hair. It’s becoming a real problem for me, but I don’t always get around to trimming it. Nothing motivates me to groom myself like posting a video to the Internet. For that reason (and because I’m told some people prefer watching videos to reading a lot of text), below is a vlog version of this post. Close your eyes and you’ve got a podcast. Scroll down and it’s a blog post. Enjoy please enjoy.

I have worked for the same employer for over 25 years, and have made it through three acquisitions, a bankruptcy, and countless reorgs. Along the way I’ve had thirteen different bosses. How have I lasted this long? I joke that my spirit animal is the cockroach. But actually, I’d say my longevity is a combination of the right attitude and the right practices.

Of course it would be a stretch to say that the team time trial, a type of bicycle race, taught me how to survive in corporate America. However, as I will explain here, the same attitude and practices apply to each. The team time trial is a great metaphor. 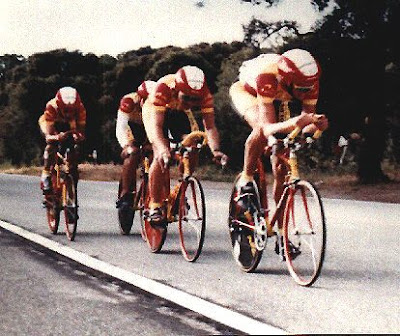 What is a team time trial?

In road racing, the individual time trial—often called the “race of truth”—consists of each rider racing alone, against the clock  (typically sent off at 1- to 3-minute intervals). A team time trial, aka TTT, is the same thing but with teammates racing together to try to put up the best time. Crucially, it’s not the time of the first rider that’s taken. If it’s a five-person team, the third rider’s time is what counts. For nine riders, it’s the fifth or sixth. To be competitive, a team needs all (or at least most) of its riders contributing to the effort of taking turns breaking the wind for the others. They must cooperate perfectly.

Lesson 1: Work for the team

“Be a team player” is obviously a cliché. It’s something management routinely tells us, and they might even mean it, but it often doesn’t pack much punch in a culture like America’s where individualism, and individual success, are promoted so universally. So it is in sport, and in cycling in particular, with Lance Armstrong being perhaps the greatest example of the self-focused sportsman—a bully obsessed with individual domination, fearful of any personal ambition among his teammates.

The team time trial is ideally the purest antithesis of all this. A TTT team that works well together is a thing of beauty. Every rider is acutely aware of how every other rider is doing. If you’re totally on fire, you carefully channel this by increasing your output gradually, without disrupting the smooth functioning of the formation. You may take a bit longer pull, and you can even slightly increase the speed of the group while you’re on the front … but harmony is your first priority.

This is harder than it sounds. It’s almost automatic to accelerate when you start your turn at the front, because this is right after you’ve recovered in the line. But, if you’re a good team time trialist, you never forget how hard it is to latch on to the back of the group, after having slowed down to let the other riders past. This is the hardest part of a TTT because at the back, you’ve just finished your pull, aren’t yet in the slipstream, and need to accelerate slightly. If the guy on the front increases the pace at all as you’re latching on, he practically breaks your legs.

Let’s think for a moment about teamwork in corporate America. In your workplace, how much energy do you think people devote to helping their colleagues? Is much attention paid to buoying up those who are struggling? Other than managers, do people even care?

It’s amazing how many seasoned bike racers screw up the team time trial by kind of missing the “team” part. In fact, it’s often the team leaders that cause the most  problems—because their drive and talent and alpha-dog-ness is what made them leaders in the first place. Returning to my Lance Armstrong example, to watch him in a TTT was like agony for those of us who understand this event. He pulled too hard when taking the front, screwed up the rhythm, sometimes dropped his entire team, and—as came out later—would terrorize his teammates over the race radios for not going fast enough.

Not that Lance was the only team leader to do TTTs poorly. In the 1993 Tour de France, the Gatorade team was selected, in part, to support their leader, Gianni Bugno, in the TTT stage. This was supposed to be an opportunity for Bugno to take serious time out of the race favorite, Miguel Indurain, whose Banesto team was better suited to helping their leader in the mountain stages. But Bugno apparently couldn’t keep it in his pants and his team floundered in the TTT, actually losing 12 seconds to Banesto. How was this possible? Well, Indurain—though he was hands-down the strongest individual time trialist in the race—matched his team’s pace perfectly. As reported in Winning magazine, “When asked how it was that Banesto stayed more or less together while Gatorade were all over the place in the TTT, [Banesto team director] Jose Miguel Echavarri responded that ‘it was necessary that the king went with the people, rather than that the people try to follow the king.’”

(Ironically, pro cycling teams are run like companies, and yet all too often the prima donna behavior of riders like Armstrong and Bugno has been allowed, perhaps encouraged, by management … hence the revolving door of talent on US Postal, which can’t have been good for long-term team morale.)

When I was at UC Santa Barbara, our TTT was a perfect case study in selflessness. We were all completely devoted to the team’s success, despite the fact that our two best riders really didn’t get along. This didn’t affect how they rode—they unfailingly set their grievances aside and worked together flawlessly in races. Our reward for perfect teamwork was a TTT victory at the collegiate National Championships.

The next year, I’d transferred to UC Berkeley, and though on paper we had a more talented overall roster, we never got such good results. The reason, as all but one of our riders would happily explain to you passionately and at length, was our team leader. He was headstrong, self-absorbed, and a terrible team time trialist. The way he started his pulls, you’d think he was deliberately trying to saw his teammates off the back, like this event was about him showing us how dominant he was. Spiritually, a good team time trialist is almost like a Girl Scout den mother; this guy was more like Ahab—and every other living human was Moby Dick to him. (For a more complete case study of this strong, successful, but flawed individual, click here and do a page search for “Ace.”)

Okay, so how does this relate to the corporate world? Beyond being an obvious object lesson in the downside of selfishness, I think it points to the need for wider awareness than your personal ambition will give you. A TTT isn’t about you being fast; it’s about your team being fast, which requires a whole lot more than your own strong pedaling. In my experience of the workplace, revenue and earnings are the measure of victory, and maximizing them is extraordinarily complicated. Creating the right products and services, building them right, marketing and selling them effectively, and providing good support cannot be achieved by the smartest guy in the room performing brilliantly.

Yes, you need smart—but also patient, careful, and generous—people in countless rooms working together. Those who rise in the ranks by “promoting their personal brand” and striving to stand out may naturally have a hard time leading their teams toward the results that matter. A company will only thrive if it promotes those with a sensitivity to how well everyone is rowing together. A sales director at my company once joked to me, “I’m good at this stuff because I’m pretty stupid, so it’s impossible for me to overcomplicate things for my reps.” His humility, and his focus on collective results, have apparently served him well.

In all my years of bike racing, I was never the team leader. This isn’t because there’s anything wrong with me, some fundamental lack of ambition or fear of success. It’s that I’ve been lucky enough to be on teams with better riders than myself, and selflessly supporting them was the obvious and correct thing to do. Bringing my support (aka domestique’s) perspective to the TTT was a natural fit, and nice insurance against instinctively trying to show dominance and messing up the flow. Steeped in the art of looking after my team leader, I was a natural at looking after my team as we fought the wind together.

Similarly, in my work life I’ve never been the alpha dog, and my humble approach—i.e., helping others in the background vs. showing off—has worked out well. I sincerely believe it hasn’t held me back; if anything, I’ve been given all the responsibility and growth opportunities I can handle. Even if my approach isn’t the ticket to rising through the ranks at work, it does seem to help with career longevity. Maybe I’ve missed out on some promotions and the income growth that can bring, but I’ve also avoided the pitfalls of the kind of self-serving behavior that hampers the results an employer cares about. I believe there are certain risks in clawing one’s way up the corporate ladder too swiftly; whether or not I’m right, I can say that I’ve never been unemployed. For the last 26 years I’ve had continuous income, and that adds up.

I chalk all this up to my TTT mindset. Recently I had my annual review and my boss told me I “need more swagger.” I took this as a compliment.

Dang, this has taken me more words than I expected. Tune in next week for three more (shorter) lessons gleaned from the tarmac crucible of team time trialing. 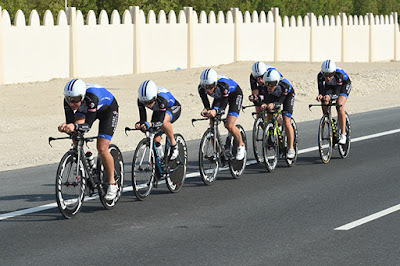 Email me here. For a complete index of albertnet posts, click here.