What could be more embarrassing to my teenage daughters than my blogging? Well, vlogging is probably on the list. For that reason alone I’m providing this post in both text and video formats. If you want to laugh with me, at me, or at my kids for having such a dorky dad, click the Play button below. Otherwise, just scroll down for the text.

This post continues my discussion of how lessons learned in cycling team time trials (TTTs) can apply to survival in corporate America. If you haven’t read my previous post, go back and start there. 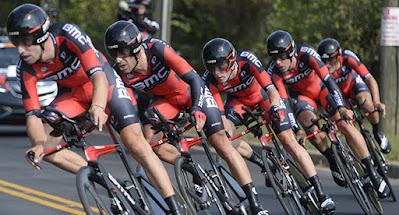 On the face of it, pacing in a TTT is pretty straightforward: you just go flat out the whole time, right? Well, yes and no. When you’re on the front, sure—you go all out (or, more precisely, at your anaerobic threshold). But how long do you stay on the front? That’s the tricky part. If everybody’s pulls are too short, there are too many transitions, too many efforts spent latching on to the back of the line, too many opportunities for tiny losses of efficiency. But pulls that are too long don’t allow enough recovery and riders will grind themselves down. There’s no pre-established pattern, such as everybody leading for 20 seconds. It’s up to each rider to decide how long to be on the front each time before dropping back.

This will vary by rider, by race, and by how the rider is feeling at any point in the TTT. The only rule is, if the team is going, say, 30 mph on a flat road, you better keep up 30 mph when you’re on the front. If your pulls are only half as long as the next guy’s, that’s fine—but don’t you dare take a slow pull. Your team will never get that time back, and what’s more you screw up the rhythm and thus the morale of the whole team. When you take the front, everything and everyone depends on you. To pace yourself accurately means being completely honest with yourself about how long you can pull, per rotation, at the group’s speed. This isn’t a one-time assessment, of course; you must always be ready to adjust the length of your pulls (because your stamina erodes, or conversely if you start poorly but begin to feel better). In short, you are on high alert the entire time (which is part of why I always found these races terrifying).

Needless to say, pacing is important in the workplace too. And yet, I have known plenty of people (over my decades in the working world) who don’t seem attuned to this. They take on too much responsibility and let their workdays drag out too long—which is like taking too long a pull. Eventually they start to get overwhelmed and, for all their workaholism, start dropping this or that ball, or turning out poor quality work—which is like taking a slow pull. Of course it’s hard to admit you took on too much, which can lead to blaming others, making excuses, and so on.

So what does pacing look like in the workplace? Sometimes it’s not always putting your hand up to lead a big project, but more often it’s pushing back a bit on your boss if you’re getting overloaded. I’m routinely surprised how few people do this—they’ll volunteer to work on something over the weekend, for example. (I would never do this; I figure once you’ve demonstrated that your personal time isn’t sacred, a boss would have to be crazy not to take advantage of that. Today’s stretch becomes tomorrow’s job description.)

Another corporate equivalent of a shorter pull is delegation. I’m talking about handing off a task not because you’re too slammed to do it, but because it might be a nice challenge for a colleague, who may appreciate the opportunity. I used to think delegation was just for managers, but it’s not. If you’ve coached a colleague a number of times and thus built up goodwill, why not offer him or her an interesting task? In my experience, a manager won’t fault you for this, as long as the work gets done.

In a TTT, if you pace yourself poorly, you could slow down the team by taking slow pulls or blowing up and going off the back, unable to contribute anymore. This can ruin the race for your whole team. When we consider what’s at stake in the workplace, the analogy falls down a bit because if you don’t pace yourself well in your job, it’s not just a project or campaign that suffers. It’s your whole career.

Lesson 3: Get help when you need it

We can’t all be “on” 100% of the time, but we’re taught not to make excuses, and to deliver on time, every time. Individual ambition drives us to just dig deeper when we’re struggling. This is fine here and there, but if it becomes a habit, it stops being sustainable. Our mental health suffers, probably our work/life balance, and the collateral damage to our personal lives can eventually become a serious distraction. (My father was a hopeless workaholic, and during his divorce, he couldn’t sleep at night and would often fall asleep on the job—the workplace equivalent of crashing out of a TTT.)

Why don’t we ask for help? Surely somebody could pitch in on a project, revise the scope, or relax a deadline, if we ask? I think the problem is often lack of humility … it’s hard to admit you’re not up to the demand. This is easier to spot in a TTT than the workplace because a rider who doesn’t ask for help is just suddenly gone. It’s a disaster and I’ve seen it too many times, usually in the first few miles of a TTT. In the photo below, we lost two guys in the first mile or so … and needless to say didn’t go on to have a great race. 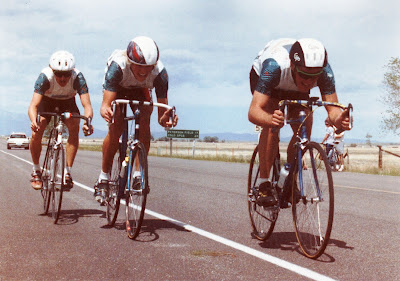 What does asking for help look like? In a TTT, it’s yelling like crazy if you get gapped, or sitting out a pull if you’re feeling crappy. When you’re on the back and a teammate finishes his pull and drops back, you wait until he’s just ahead of you and tell him, “Take it.” You let a gap open for him and joins the line early. Granted, he won’t be stoked about this, as it gives him less time to recover before his next pull, but tagging him in like this is way better than slowing down the group or getting dropped, thus abruptly leaving the team without your services. I’ve had TTTs where I started badly, got some help, and then went on to fully contribute.

So how do we ask for help in our corporate jobs? That’s more complicated, of course, but it starts with humility, trust that your colleagues won’t resent you for reaching out, and a focus on team results vs. worrying about your reputation.

Lesson 4: be grateful you’re in the race

The team time trial was definitely my best event as a bike racer. I recover quickly from deep efforts so the repeated hard pulls on the front, followed by rest periods in the line, suited me perfectly. Unluckily for me, the team time trial is a somewhat rare event. I did my first one in 1982, but didn’t have another opportunity until 1985 when a TTT featured in the Red Zinger Mini Classic stage race. My next chance wasn’t until 1988 when I started collegiate racing. Happily, in college there were several of these races during each season, followed by the conference championship TTT and—since my teams qualified—the national championship. I was so grateful to ride so many of these TTTS during my college racing years, and bummed that there hasn’t been an opportunity for me since.

Meanwhile, I was blessed to be on that UC Santa Barbara team that was loaded with amazing talent. It has certainly helped shape my worldview that my greatest success in the sport came not so much from my own ability, but from having been on the right team at the right time. I can never forget how lucky I was just to get to race those TTTs when I did, so I am always grateful for the opportunities I have in my career, even if it can be difficult and frustrating trying to make the most of them.

Moreover, to even have a career in corporate America requires a lot of luck. You were born in this country; you had the educational opportunities needed to be qualified for a white collar job; and, you had enough opportunity to secure a position. This is a really big deal. There are something like 65 million Americans employed in the professional and technical workforce, and while this is about 41% of US workers, it’s only about 1.4% of the world’s adult population. Think of all the things that had to be true for you even to have your job.

Why does this matter? It’s because being talented and educated enough to get and keep a job isn’t the whole battle. You have your own contentment to deal with, and I suspect lots of corporate employees have a bloated sense of entitlement—which can make them disgruntled, or bored, or restless. This in turn can a) affect their performance such that they don’t survive the next round of layoffs, or b) cause them to job-hop too often (like hitting the Hyperspace button on their careers) because they blame their employer for a dissatisfaction that has its roots in lack of gratitude.

I’ve outlasted colleagues who spent far too much energy fretting over the golden parachutes the executives get, or the fact of younger people passing them up on the way up the ladder, or the apparent lack of advancement opportunities given to them. I find it a shame when someone lacks the humility to just knuckle down, do their job, and be happy to be there. In this country we are all pressured to pursue and gratify our individual ambitions, but I’d like to point out that where life balance is concerned, contentment isn’t necessarily a bad thing. Instead of worrying about your rise through the ranks, just be glad you’re on a team. 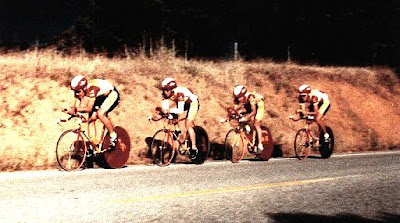