From the Archives - Punish Me, Young Man!

Today’s post is a story I originally wrote for Daily Peloton. (Their servers crashed a couple years ago and all their content was lost, so I’m gradually re-posting my dp articles here.) Enjoy please enjoy.

On my ride today I got crushed by a guy whose bike had a front reflector. And yet, it was a glorious ride. (If that grabs your attention, read on, but if you’re looking for pro race results, you won’t find them in this story.)

I got off to a late start on my ride this morning, tired and feeling vaguely demoralized. I’d been caught in the rain on the previous day’s ride and was having that standard existential crisis of “Why do I train so much, and so hard, in October no less, when I don’t even race anymore?” So I was dragging to begin with, and then on my second climb, South Park Road, I really started to bog down. I was not feeling any of those “positive sensations” the pro racers are always talking about. And I kept seeing these squashed newts on the road. 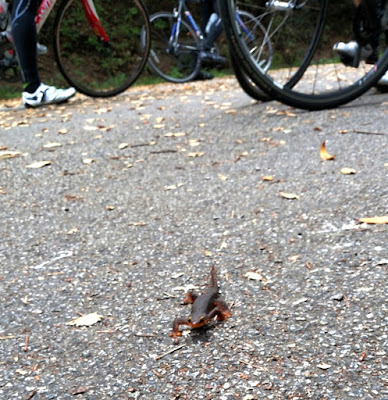 These endangered newts are protected half the year by a road closure, but it doesn’t begin until November and I guess they got a head start on their seasonal migration because of the early rain. It was depressing: I saw like two dozen of them, smashed completely flat. Okay, this really shouldn’t have affected my morale, but that’s the kind of morning I was having. I almost turned around and went home.

Fortunately, the night before I’d watched the violent Western “3:10 to Yuma” and was still feeling the effects of second-hand testosterone on the baser part of my nature—the lizard brain that doesn’t make excuses. I decided to push on, taking the steep, long descent of Claremont Road so I could drag myself back up it. Toward the bottom I saw this guy coming up. He waved, and I gave a little nod before realizing, wait, that was a really big wave, maybe he needs some help. I sat up, looked back, and (being basically at the bottom already) turned around and rode toward him. He slowed down so I could ride up alongside him. “Hi, I’m new here and don’t know any rides,” he said.

Now, before I commit to sharing my ride with a stranger, especially if I’m grumpy, I’ll usually try to figure out what kind of rider he is. You can’t really go by how nice his bike is, at least in the Bay Area, where a newcomer to the sport will happily drop three or four grand on a bike. But you can get clues: how well does the bike fit him? Double or triple crankset? And does his gear look suspiciously new, or well used?

This guy was on a spanking new ride, an Ultegra-equipped LeMond, with not only a triple crankset but a front reflector. I think I first recognized the stigma of a front reflector when I was about eleven. In all the shops I’ve worked at, that was the one reflector we always left off on new bikes, even the cheap ones. Getting the risk-averse shop management to approve this was never hard: front reflectors only serve those who ride on the wrong side of the road at night without a light.

And yet, this guy somehow didn’t seem like a novice. (I used to hear the term “Fred” applied to beginners, but one of our local heroes, Fred Rodriguez, has pretty much put that name to rest.) This guy’s position was good—he didn’t have his handlebars jacked up Mary Poppins style, which seems an epidemic among novice cyclists. And he was lean. He also had this European accent, which I couldn’t place. He was medium height, with very dark skin. His clothing looked great (but of course this is something money can buy). I asked him how long he was looking to go, and he said four hours. Four hours!

I told him I wasn’t going that long, but if he wanted I’d take him up the steepest climb in the area. I’m always trying get my friends to do this climb, called Lomas Cantadas, which gains 1,240 feet in about 2½ miles at an average grade of 11%. My friends’ responses usually range from “Yeah, right” to “I did that once and I’ll never do it again as long as I live.” How refreshing that this guy was so willing. Of course, he not only had no idea where else to ride, but didn’t know what he was getting into.

But first there was Claremont to get over. We began the climb—about 1.5 miles averaging 10%—and he started half-wheeling me right away. That can be annoying, but then I know how instinctive this is when you’re riding with someone you don’t know and want to make a good impression. But man, the harder I went, the faster he went, without ever seeming to strain. “New bike?” I asked him. He told me he was borrowing it from a local shop: he’d just moved here from Austria and would be trying out for the Health Net team on Monday. Had I heard of Health Net? Uh … yeah. Wow. Suddenly I realized that, as ambassador for Bay Area cycling to a serious European racer, I was going to have to dig deep to make sure this ride wasn’t a total waste of his time.

Dang, he was strong. Had this climb gotten steeper? I’m known on my bike club for having the strange (and annoying) ability to chatter away merrily right up to my anaerobic threshold, but here I found myself gasping for breath. I asked him how old he was: twenty. I’d been thinking we were more or less the same age, but only because I always forget how damn old I am. He asked, and I admitted I’m thirty-eight. (Going on fifty, I didn’t add.) I asked what his specialty was, and he said he’s an all-rounder. Yeah, he looked it, but he could sure climb. Toward the top of Claremont, he said, “Hey, you ride good.” He paused, then continued, “For thirty-eight.”

I rested a bit descending to Orinda and along the flat section before the dreaded Lomas Cantadas. As soon as we hit the climb I felt its wrath. (At least there’s no traffic—the narrow road winds around through a sparse residential area that eventually gives way to ranchland at the summit.) Within a quarter mile I was in my lowest gear and bogging down, but the Austrian never slowed. I dug deeper and deeper, looking for some sign that he was feeling anything. No sign. I asked him if he raced pro or amateur. “Professional,” said, and quickly added, “but only on a Continental team.” He pointed at his jersey: this past season he raced for Swiag Pro Cycling Team, and for the Austrian national team. I asked if he got to ride Worlds, and he said that the federation screwed up and didn’t submit their results to the UCI, and ended up only getting to send one rider instead of three. He’d been among the original three, but wasn’t the one guy who got to go.

So here I was, riding with an honest-to-God European pro! I wished I’d had better legs, though the difference between my best and worst day probably wouldn’t have been perceptible to him. Boy did I suffer. Somewhere along the line I hit my highest heart rate of the year, 181. I asked him at one point what his was: 150. 150! When I was his age, I would hit 150 riding to class … he must have really been loafing. This, ladies and gentlemen, is the difference between a local boy and a real pro. He’s basically a different species.

On the hardest part of the climb, a couple miles in, I came completely apart. I was fricking rendered. The center could not hold. The infrastructure was crumbling. The fountains no longer worked in my plazas. Goats grazed in the shell of my capitol building. I weaved, my form was shot, my legs howled (albeit silently) like spoiled children, I wheezed like a leaf stuck in the blower. And yet, it was fun! I was taking on all comers: Man Against Man, Man Against Nature, Man Against Himself. I way dying, yes, but I had that wimp in my brain up against the turnbuckles at last. Oh yeah? Feeling lousy? Feeling weak and worthless? Well, let’s head out with this guy, lets offer him up my skinny legs to snap like twigs, let’s let my male ego trounce the rational mind once and for all, let’s see just how low I can go, how much pain I can pile on. I doubted the pro even noticed what I was going through, as he always stayed half a bike length ahead.

Ages ago, when my brother Geoff was an up-and-coming eighteen-year-old racer, he often rode with a thirty-something ex-racer named Bob, a crusty old veteran who’d been pretty good in his day. One day, as they duked it out on an epic Colorado climb, Geoff tried to keep a poker-face despite terrible, terrible suffering. Finally, he sneaked a glance at his opponent. Bob turned to him, grinned, and said, “Punish me, young man!” Ever since I heard that story, I’ve longed to use that line, and this here was almost the perfect opportunity. But the Austrian pro’s English wasn’t perfect, and I’d hate for the language barrier to distort the joke into something embarrassing. I was sure thinking it, though.

My motor control gone, I fumbled and dropped my water bottle. “Oh, I’ll get it,” the pro said. Normally I’d have tried to impress him by circling back and snatching it up without stopping, but I was in no condition to do it, and welcomed a brief respite. Besides, I wanted to see how long it took him to catch back up. He took his time circling back, stopped, stashed the bottle in his jersey pocket, and then smoothly but unhurriedly cruised back up as I kept myself redlined. I was reminded of the time I watched piranhas hunting goldfish in an aquarium: they’re so much faster than their prey, they simply don’t have to hurry. “No rush, I’ll take out the fish whenever I feel like it … okay—now.”

Finally the awful, beautiful climb was over, and we cruised the rest of my ride (he still had two and a half hours to go), chatting. He told me his name, Robel Tedros, and I figured out how to remember the name of his team, Swiag (“I will get lots of swag”). I gave him the URL of the bike club I’m on, and he said he might look me up. He described his plan: if his audition with Health Net goes well and he gets a good offer, he’ll race in the U.S.; otherwise he’ll move to Italy and race there. (I’m not sure why he’s leaving Austria, though he did mention the weather is lousy there.) I described some other roads he could check out, wished him luck on Monday, and we parted ways. I can’t imagine he won’t shred the Health Net boys, but who am I to say?

[Here’s a photo of Robel from around the time I encountered him.] 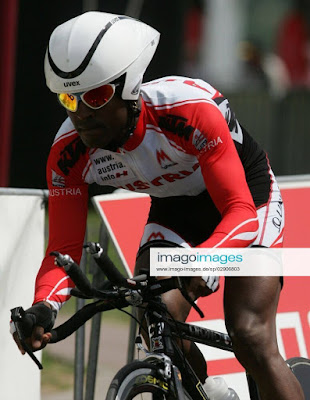 So, next time you see a guy with a front reflector on his bike, don’t jump to any hasty conclusions. He might be one of those mountain drivers!