I’m not a big fan of bridal registries. Why should I be, when I’ll never be a bride? When my wife and I married we didn’t do a registry. I thought it was outdated even then, like dowries, and that was 27 years ago. But with wedding season upon us, and this tradition not going away (as much as it may morph, e.g., registering for cash, for trips, for “experiences,” for charities, etc.) I’m here to suggest some improvements.

I think there should be a rule that couples who live together before marriage don’t get to register. They’ve taken the fun out of everything by starting early on playing house. Part of the excitement of getting married should be no longer eating off mismatched plates and silverware (well, flatware) from Goodwill.

About a quarter century ago, when I went to weddings seemingly every weekend, I sometimes found registries helpful because I often barely knew the couple and had no idea what they’d want. This is because work colleagues would invite the entire office, perhaps to pad their guest list so as to make the wedding more impressive or something. In this case I’d race to the online registry to try to snap up the cheap items like the $30 washcloths before they were all gone. Once I visited a registry way too late and all I found were grotesquely overpriced items—I distinctly remember a $80 porcelain butter dish, with a lid and everything. Who uses these items? I guess I had a butter dish long ago before it broke. It was under a dollar at Goodwill and looked strangely similar to the $80 one.

That being said, the better move would be to have a smaller wedding and assume therefore that most guests know you well enough to choose something thoughtful. Then, for people who are just congenitally terrible at choosing, you have a limited registry of affordable things. But instead of choosing a specific SKU to get just the make, model, and style you want, be more vague. Then your guests can hunt for a bargain instead of Williams Sonoma having them by the balls.

To make wedding planning easier, I’m providing a large handful of can’t-lose items that for the most part are pretty affordable. These recommendations are based on what I’ve enjoyed having, or wished I had, over my long and happy marriage.

This has traditionally been my go-to gift for my guy friends who got married. Most of them are cyclists and thus in love with giant starchy meals and cool mechanical apparatuses. 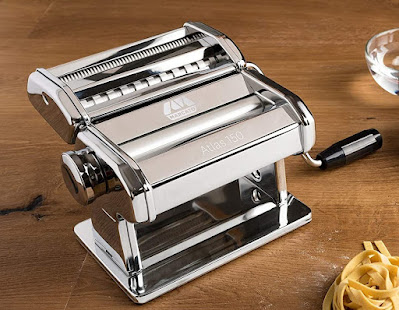 This also seems like a nice wedding gift because cooking together is, or ought to be, a fun thing for any couple to do. Full disclosure: I haven’t actually made that much pasta with my wife, but my kids love making it with me, which gives my wife a break from cooking. (I’m not suggesting that this traditional arrangement is the way to go for all or most couples, by the way. It just happens to be ours.)
Item #2 – Zip-together sleeping bags

If the happy couple doesn’t already have zip-together sleeping bags, they totally should. What an amazing invention. You actually end up with more room than in a standard bag, because you have each other for warmth. Standard sleeping bags are designed to be a very close fit, for warmth, and I find them claustrophobic. If this gift seems too pricey, go in with another couple on it. Just be sure to sync up the left vs. right bags!

Now, you may object that not all couples like to camp. Well, here’s the thing: maybe they don’t, but if they have kids, they’re going to get dragged into campouts eventually. That’s just the way it is. So why not be prepared? Here is a chilling true story: we camped with several other families once, and one didn’t have any camping gear so they rented it. Well, whoever picked up the gear royally screwed up and unknowingly got the child-sized “Tigger” bags for everyone. They didn’t discover this until they turned in. They were good sports at first, but this was in the spring and it got really cold that night. The damn bags came up to, like, their waists. At like 3 a.m. our entire group was awakened by the sound of the couple having a major shouting match. They were freezing their asses off and furious. The one who got the wrong bags was obviously lambasted at length, but reasonably countered that the other hadn’t lifted a finger to help. They made it through the night but left in a huff first thing in the morning, instead of staying a second night like the rest of us. They are now divorced.

If the happy couple doesn’t have this, they need it. Everybody does. If they do have a Sonicare, buy them a bunch of replacement heads—those are expensive. Look, this may seem hopelessly quotidian, but let’s face facts: when the blush of new love starts to mellow, and the spouses (spice?) start to get more critical of each other, they should at least have beautiful white teeth and good breath. This becomes more important in the third decade of marriage when their hair is going grey, the guy may be going bald, and their skin starts to wrinkle … they can still have great teeth.

But the real reason a Sonicare is such a good gift has to do with the next item on my list.

You know what the problem is with wedding registries? The couple goes on a little shopping spree through the kind of high-end department store that is all too happy to offer a free registry service, and they imagine themselves being all fabulous with their exquisite china, fancy-pants silverware (well, flatware), $80 butter dishes, etc. and none of this has to do with the actual, humble day-to-day business of being a married couple. The china gathers dust on a shelf, the flatware is bogus because it’s too weird so they get sick of it plus for some reason it’s not supposed to go through the dishwasher, and the butter dish is broken immediately and this seems like a tragedy based on its price tag, when really nobody should care because butter dishes are practically useless.

Enter the chip clip. Look, I know we shouldn’t even be eating chips because they’re not good for us, so any kitchen gadget that encourages such behavior should, arguably, be shunned. But this is the gift that says hey, maybe we don’t care and we’re gonna be naughty sometimes, indulge in this guilty pleasure, and the chip clip is how to be unapologetic about this. (Growing up, my family never, ever had chips around, unless maybe someone was about to throw out the rest of a bag at a swim team picnic and we inherited it. Thus, the first time I saw a chip clip, at my friend John’s house, I was enchanted.)

But wait, there’s more. Part of being a happily—dare I say proudly—married couple is running a particularly ship-shape household through sheer ingenuity and a can-do attitude. That’s where the Sonicare comes in. When you wear out a toothbrush head, you can salvage the incredibly powerful magnet from it and put it on your fridge. These magnets are so powerful you can remove them only by sliding them to the edge of the fridge. You can magnet anything to your fridge and it won’t slide down.

How does that involve the chip clip? Break the original magnet off of it—this is the weak magnet that can only support the weight of the chip clip itself—and replace it with the Sonicare magnet. Now you can clip the whole damn bag of chips right to your fridge! It’s totally awesome! 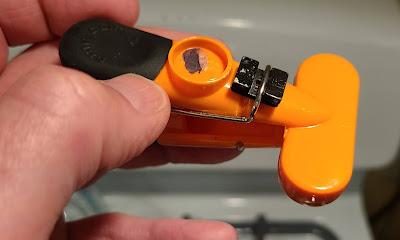 Still not sold on this, based on how very humble such a gift would seem to the recipient? Not to worry, I’m sure Tiffany sells a sterling silver chip clip for like $8,000. 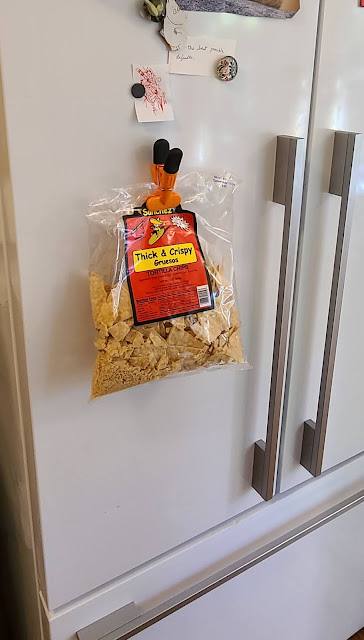 Surely there will be somebody at your wedding who just loves giving beautiful gifts and will want to splurge on something. So it was for my wife and me: a college friend of hers surprised us with an absolutely beautiful leaded crystal serving bowl. Look: 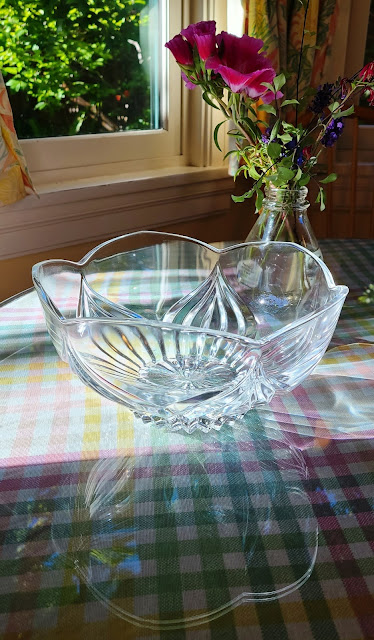 We do use this bowl from time to time, and I’m always struck by its loveliness. I wash it with extreme care, always remembering the scene in Vladimir Nabokov’s excellent novel Pnin in which the protagonist, a poor émigré professor, cleans up after a dinner party. This party was supposed to celebrate his getting tenure, but he has just learned that actually he’s been let go. He morosely ponders this as he cleans his own beautiful serving bowl:

He prepared a bubble bath in the sink for the crockery, glass, and silverware, and with infinite care lowered the aquamarine bowl into the tepid foam. Its resonant flint glass emitted a sound full of muffled mellowness as it settled down to soak… He gathered the wiped spoons into a posy, placed them in a pitcher which he had washed but not dried, and then took them out one by one and wiped them all over again. He groped under the bubbles, around the goblets, and under the melodious bowl, for any piece of forgotten silver—and retrieved a nutcracker. Fastidious Pnin rinsed it, and was wiping it, when the leggy thing somehow slipped out of the towel and fell like a man from a roof. He almost caught it—his fingertips actually came into contact with it in mid-air, but this only helped to propel it into the treasure-concealing foam of the sink, where an excruciating crack of broken glass followed upon the plunge.

Now, here’s where the novel and my memory of it diverge: in my version, Pnin cries out in anguish, “I haf nofing left, nofing!” In actuality, he utters this line at another point in the book. No matter: on this (mistaken) basis I long ago nicknamed our beautiful bowl the “I haf nofing bowl.” My wife calls it this, too—and isn’t this shared private language one of the joys of marriage?

(Well, not entirely private. My kids are vaguely aware of this moniker; when I took the bowl down to photograph it today, my younger daughter called it “the Pnin bowl.”)

This product doesn’t actually exist, so you’ll need to do a Kickstarter or something. I’m not talking about a boxed set of small cards for people who keep track of all their friends’ anniversaries. I’m talking about lavish, full-sized cards for the partners to give each other. This can help in three ways. First, it would save time because it’s tough to find good anniversary cards as so many weddings are in June and must compete with wedding, graduation and Father’s Day cards. Second, by giving the couple a 50-pack, you’re expressing your faith that their marriage will last. Finally, you’re mitigating the risk that one of the parties will forget to buy a card until it’s too late … so you’re safeguarding the marriage!

This might seem like a pretty skimpy gift, since obviously anybody can view albertnet for free from any Internet-connected device. But this requires the would-be reader to remember that this blog exists, which so far almost nobody does. But a limited number of people can have each post emailed to them automatically, the instant it goes live. How much is this worth? Well … how much ya got? 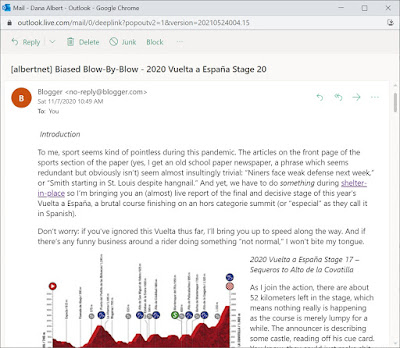 Full disclosure: this feature doesn’t always work. In fact, I can’t say it even usually works. The emails will go out just fine for a few weeks, and then they mysteriously stop. The one shown above, from last November, is the last one that went out. So, maybe this particular gift isn’t such a great idea after all…