Did I really write a book review, for practically no audience, all the way back in 1994? Yes, I just now stumbled across it. This review was within a letter to my brother, who’d recommended Bill Bryson’s The Lost Continent: Travels in Small Town America. You might as well read my review; it’s really more about dining out in small towns than it is about helping you decide whether to read Lost Continent. 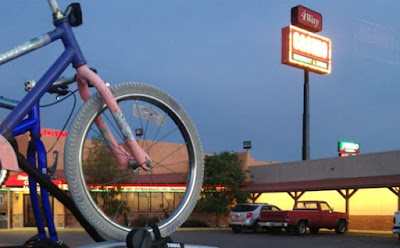 I must say, that Bryson fellow has a sharp sense of humor and a keen eye for detail. I especially like his made-up town names: Draino, Indiana; Tapwater, Missouri. And his mockery of American products: Hunk o’ Meat Beef Stew ‘n’ Gravy; Sniffa-Snax; Country Sunshine Honey-Toasted Wheat Nut ‘n’ Sugar Bits Breakfast Cereal. It’s an easy book to get in and out of, since it rambles along playfully without any complicated structure. I read it eagerly during my recent trip to Oregon, and then at the Amtrak station while waiting for my train, and then while the train was delayed.

Well, I’m almost done with the book now, and upon careful consideration I must conclude that as far as I can tell, Bryson has not given America a fair shake. After a while his clever critiques became tiresome, cranky complaints that I didn’t need to hear. My moment of epiphany came when I read his description of Wells, Nevada:

I spent the night in Wells, Nevada, the sorriest, seediest, most raggedy-assed town I’ve ever seen. Most of the streets were unpaved and lined with battered-looking trailer homes … Such economic life as Wells could muster came from the passing traffic of I-80 … I turned up my collar and trudged the half-mile from the town proper to the interstate junction with US 93, where the most prosperous-looking truck stops were gathered, forming an oasis of brightness in the pinkish dusk.

I went into what I looked to be the best of them, the 4-Way Café, which I gather took its name from the fact that it consisted of a gift shop, restaurant, casino and bar … It was absolutely, in my opinion, the worst food I have ever had in America, at any time, under any circumstances, and that includes hospital food, gas station food and airport coffee shop food … I pushed the plate away and wished that I still smoked. The waitress, seeing how much I had left, asked me if I wanted a doggy bag.

“No thank you,” I said through a thin smile, “I don’t believe I could find a dog that would eat it.”

I did get a chuckle out of that, but then realized, wait, I’ve been to Wells, Nevada, recently, and had a totally different experience.

It was the summer of 1991, when I was driving out to Boulder with a friend of a friend. We stopped for the night, got rooms at the Motel 6, and relaxed for a while before setting out to find a worthy restaurant. The motel was about like all Motel 6’s everywhere: clean, perhaps a bit too air conditioned for its own good, but generally a fair bit nicer than many of the apartments I’ve lived in. Scoping out the town didn’t take too long. We even went to the 4-Way Café, which as Bryson reported was a conglomerate of gift shop, restaurant, casino, and bar. But we never even considered eating there; it was clearly not even an option. Nothing obvious about it tipped us off as a lousy place; it just seemed lacking in whatever local flavor a café in Wells, Nevada could have. Wouldn’t anyone rather go to a place that’s only a restaurant? Have you ever encountered a gift shop or casino that appealed in any way?

We found a more promising little café not far away, right next to the visitor’s center. Now here’s something interesting: this so-called “raggedy-ass town” actually had a visitor’s center. It wasn’t a commercial operation, but more like a tiny museum of whatever heritage Wells happened to have. Free coffee, a cheerful docent, etc. Would the sorriest, raggedy-assed town in America have a visitor’s center?

The café we went to also seemed to try harder than it really needed to. It wasn’t overbearing or self-important, mind you; not like Zachary’s Pizza, which has all its awards framed and on display. But the mop-topped glasses-faced kid behind the counter was friendly, and looked at us intently, maybe trying to figure out where we came from and what brought us to Wells.

My philosophy about eating in strange towns, or even at strange restaurants in general, has just two basic tenets:

My rules for dining out are not nearly as humorous as Bill Bryson’s [which include prohibitions against photographs of the food, flocked wallpaper, live entertainers, bloodstains on the walls, or staff you can overhear talking in the kitchen]. My rules, though, may be a bit more practical. I asked the teenager behind the counter what he thought was the best thing on the menu. He broke into this wide Ritchie Cunningham grin, and with a little gleam in his eye, declared without a hint of hesitation, “The Super-Deluxe burger. With fries. Oh yeah.” It was just like when a customer at the bike shop asks me to tell him about my bike.

The kid did not steer me wrong. I love a good burger anyway, but the whole time I was eating it I was envisioning this guy back in the kitchen, inspired by my order to make a Super Deluxe for himself. He’s smashing down the patty with his little steel spatula, almost in tears, murmuring to it, “Oh, yeah, that’s it, boy, that’s my half-pound of grade-A American beef, oh, and let’s grill those onions!” He does a little spin, maybe, then flips that patty over with the skilled flick of the wrist that has become his trademark, and he can just envision the delectable grease slowly soaking into the sesame-seed bun.

This is my memory of Wells, Nevada. I remember it was late in the afternoon, but still sunny, and nothing struck me as unpleasant in the slightest. Granted, I wasn’t expecting the earth to move for me; I was just glad to get out of the car and have some food and get some rest. When I read Bryson’s account of Wells, an unsettling question crept up on me: what would that teenager at the café think, reading about the “sorriest, seediest, most raggedy-assed town” our critic had ever seen? Would this guy go on thinking it’s even worth bothering trying to do right by snooty tourists? Does Bryson assume the citizens of Wells are all illiterate?

Reading this book, I am frequently reminded of Peter Jenkins’ travel book, A Walk Across America. Jenkins isn’t as funny as Bryson, to be sure. In fact, he admits in the first chapter that prior to writing the book, he had no idea how to construct a sentence. But it was enjoyable reading, anyway, and the author wasn’t so cynical. And yet, didn’t these guys tour the same country? How much of what they reported was based on what they’d hoped to find? Jenkins said his whole purpose in walking was to find out, as he hoped, that he was wrong to be ashamed of America. Bryson, on the other hand, seemed intent on proving beyond reasonable doubt that this country is going to hell in a handbasket (whatever that means).

The two writers’ methods are quite different. I saw Jenkins give a lecture once, and found him really charismatic. As you can read about in his books, he talks to people wherever he goes; lived with various folks here and there along the way; and even did his best to fit in at the cult-like commune called “The Farm.” He’s a real people-person.

Bryson seems like the opposite. He’s seems like kind of a loner, who doesn’t recall much dialogue other than brief exchanges with service-sector people whom he seems to always conclude are incompetent. His modus operandi is to drive from one tourist trap to another, silently build his case against the stupid tourists there, get back in his car, and drive on. The only distinguishing feature that separates him from his fellow tourists is that he takes mental notes and contrives clever ways to deride them later, while the tourists just putter around, buy souvenirs, and quite possibly enjoy themselves.

I also have to wonder if Bryson doesn’t actually look for trouble, in the service of his art. Maybe he chose the 4-Way Café because he predicted it’d be lame, which would give him a cleverer story than my admittedly sentimental, cloying one. I also suspect Bryson exaggerates a bit, and possibly even fabricates details. Consider this passage, about another place he ate at:

I was the only customer in the restaurant. I was quite clearly the only thing standing between the waitresses and their going home … The waitresses stood against the wall and watched me chew my food. After a while they started whispering and tittering, still watching me as they did so, which frankly I found a trifle unsettling. I may only have imagined it, but I also had the distinct impression that someone was little by little turning a dimmer switch so that the light in the room was gradually disappearing. By the end of my meal I was finding my food more or less by touch and occasionally by lowering my head to the plate and sniffing. Before I was quite finished, when I just paused for a moment to grope for my glass of iced water somewhere in the gloom beyond the flickering candle, my waitress whipped the plate away and put down my bill.

That’s definitely some funny shit, but I’m not sure I believe it. Consider Bryson’s qualifier, “I may have only imagined it,” about the dimmer switch. If what follows had actually happened, he would have no doubt that a dimmer switch was involved. If not, what could possibly account for the room getting so dark? I think he introduced this idea of a gradually darkening room on a lark, and developed it for maximum comedic effect without worrying too much about veracity. I could be wrong about this, of course, but at least my theory would help explain why nothing like this ever happened to Peter Jenkins, or to me.

When you really stop and think, in fact, the whole premise of this man’s book is absurd. What we have here is an expatriate, coming back for a visit in order to write a book about the place he has forsaken. When he describes towns like Wells, it’s like he’s run his experience through a filter of disgust and complaint. I almost wonder if he’s being careful not to enjoy himself too much here, so he won’t have any regret when he returns to England. If that’s true, perhaps we might conclude he’s more of an anti-travel writer than anything.