This post is about what hurts right now: physically, emotionally, existentially. I guess it’s also about what doesn’t hurt.

I have some new scrapes and scratches from a mountain bike crash. (Was this the impetus for this post? Oddly, no … I’d been planning it anyway. Maybe I’m clairvoyant.) 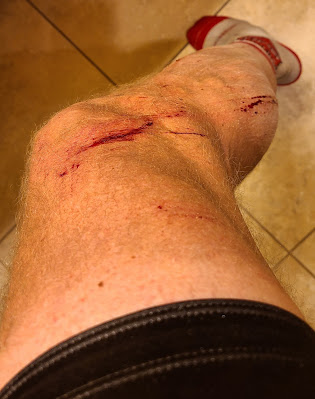 These scrapes don’t really hurt, they just sting a little. Even when I swabbed them with alcohol it didn’t really hurt, per se. It was more like the thrilling zing of eating too much wasabi in one bite.

My back hurts for no good reason and this just happens sometimes. It’s not intense or anything. On a scale of 1 to 10 this pain is only about a 1, but it’s annoying because it’s persistent, and affects how I inhabit my body. I have to bend over slowly to pick something up from the floor, which makes me feel geriatric. It’s also a distraction when I’m cycling. On top of that, I did something to a groin muscle, probably during an ad hoc yoga session my wife led me through. There’s something called a lunge, which would be a huge exaggeration for what I kind of did, but even so I practically maimed myself, so I’ve been walking funny. It hurts a fair bit (perhaps a 2) to put on my right sock.

Overall, this pain isn’t so much physical; it’s more of a morale thing. The scrapes from my bike crash  are practically refreshing ... I mean, at least they ought to hurt.

Obviously the back pain I just described is related to ageing, but at least it’s (presumably) temporary. The groin thing should subside too. But there’s new pain it looks like I’ll have to live with forever: soreness after cycling. Perhaps as recently as ten or fifteen years ago, I could do any bike ride—200 miles, even—with no soreness the next day, as if the ride never happened. Now, I’m sore after my standard 20-mile loop. It’s ridiculous. And age-related pain isn’t just depressing, it’s kind of foreboding … it carries with it the whiff of mortality. It’s like God telling me, “Yes, everything will get harder, and your bodily systems will work less and less well, and then one day your heart will stop.”

There was no intense moment of emotional anguish when (a few years back) I dropped my older daughter off at college, and then more recently my younger daughter. I was kind of surprised, both times, at my casual reaction … this is a really big deal, but it didn’t seem like it in the moment. But after the fact I’ll occasionally be hit with the reality of it at unpredictable times. For example, after my older daughter visited for a couple of weeks recently, and I dropped her at the train station and was driving home by myself, I felt a lump in my throat, and was kind of down. I’d enjoyed hanging out with her, and the fact that that she no longer calls our home home, was, well, brought home.

Of course, my older daughter’s original departure didn’t fully empty the nest; we still had her younger sister at home. I’ve had more of this poignancy since we dropped the younger one off for her freshman year. I felt a prick of it the other day when my wife absentmindedly put three plates down when setting the table, having utterly forgotten for a moment it’s down to the two of us. And I had a sharper pang when I was clothes shopping with a friend recently and bought something for my younger daughter. I was about to explain to my friend that this was for my daughter’s birthday, and this would be her first away from home, without a family party or possibly even a friend party since she’s still new to her college community. Before I could utter a word of this, though, I realized I was unable to talk, and my eyes were filling with tears. So I just stood there, silently crying while also laughing at myself.

Is this actual pain? Yes, and no. It hurts to miss your children, obviously, but all is according to plan. They’re happy to be gone, which means they’re thriving, and what parent wouldn’t want that? And yet, and yet…

Does inflation hurt? Well, I sure hear a lot of complaining about it, and about related matters like supply chain and staffing problems that are making it more difficult to get the stuff and have the “experiences” we’re accustomed to. Obviously some people will feel the sting of this more than others, based on their overall financial picture, but as a middle class American I don’t personally know anybody who is so badly affected as to have to worry about homelessness or starvation. And looking at my own situation, I benefit far too much from the unfairness of the world to ever feel butt-hurt about prices going up.

Here’s a thought exercise I like to do when I’ve just paid $13 for a block of cheese and am tempted to bitch about it: I think about thrift shopping. In the Bay Area, you can get incredibly high-end stuff in perfect condition at a consignment store. A lot of the time a garment is brand new, with the tags still on it. This is made possible by people around here having so much money, they can afford to buy this stuff new on a whim and then casually change their mind and sell it for practically nothing, probably by the bushel, to a consignment store, just to have it out of their way. This kind of wealth can only occur in a world where the human experience is massively lopsided. Think of how little money went to the factory worker who made that garment. That worker surely could not fathom the idea of paying, say, $400 for a jacket and then deciding he didn’t really like it after all. The idea that I am a beneficiary of this system disqualifies me, in my opinion, from ever opening my mouth about inflation.

There are people in this world who devote their careers to helping others. I don’t mean something trivial like helping smartphone users have a more intuitive interface; I’m talking about people who work to help underserved groups who struggle. I’m glad such devoted people exist. They are making a sacrifice. Let’s consider the experience of a person whose life work is helping the poor. Facing this ongoing, persistent poverty—though they are not themselves poor—does cause them legitimate pain, because it is a professional frustration, and perhaps because they ponder the condition of needy people so as to find motivation.

That being said, for the rest of us, I think it’s kind of an affectation to get worked up about problems that don’t affect us. If I’m eating seared ahi at an upscale outdoor café while sipping an $8 beer, in my opinion it would be poor form for me to talk the whole time about, say, the Bay Area’s housing problem. And this is just a simplistic example; people get worked up about all kinds of problems, many imaginary or exaggerated, that are introduced into the public dialogue by politicians, pundits, talking heads, and the AI algorithms that spread bullshit all over the Internet with the focused intent to fan the flames of outrage and indignation. I am not denying that people can feel real anguish about problems (real or fabricated) that don’t (or can’t) affect them, but is there any point in this?

Here’s a thought exercise to illustrate my point. Suppose you’re traveling overseas and lose your passport. This is a big deal, and throws your whole trip into a tailspin. You’re definitely suffering the loss of that passport. But now imagine that after searching for several hours, you actually find it; ergo, it was never actually lost … but for hours you suffered. Was there any point to that period of anguish? Of course not. Is this different than spending hours and hours fuming about, say, the catastrophic health consequences of 5G wireless networks? Of course not, since both situations concern a problem that does not actually exist. And yet googling “health problems from 5G wireless networks” just now produced 84 million hits.

My point is, don’t borrow pain, from those who (you suppose) suffer it, based on problems you don’t have. That’s my $0.02, anyway.

I lost my father in 2017 and of course that was painful, and it’s possible I think of him more now than when he was alive. But to be very candid about it, we weren’t great chums and he had lived a long life. His death was not a tragedy.

On the other hand, I do feel real pangs when I think about friends, my age, who have died: M— in 2016 and T— four years later. It’s not only that they were struck down far too early in their lives, with so much left to do … it’s also just that I miss them so much. I saw much less of them than I’d have liked when they were alive (based on busy lives, family stuff, etc.) and now they’re totally gone.

All kinds of things remind me of M—: roads we used to ride together, photos that flit by on my screen saver, components on my bike that I bought from him, brewpubs we drank at together, so many things both obvious and surprising. I often think of him when I’m watching pro bike racing and Richard Carapaz comes on the screen. Carapaz looks a bit like M— he … has the same grin when he’s suffering. It looks like his mouth is trying to form a grimace but he’s just too good-natured.

Recently I was walking by a new-ish Sichuan restaurant in town and paused to look at their menu, wondering if they use Sichuan peppercorns, aka “ma” (spelled 麻). Suddenly, my eyes teared up. I had learned all about these peppercorns from T—, who even recommended his favorite place and advised me on what to order. This was the last time I ever hung out with him, having coffee after a bike ride in late February, 2020. By this point it was too late in his losing battle with colon cancer to hope I could visit the restaurant with him, but I thought I could at least try the place and report back. (His last email to me was, “Let me know how it goes.”) The pandemic kept me from this field trip, and from ever seeing T— again.

Pain obviously serves a role in providing the kind of feedback that keeps you from, say, touching something that’s burning hot. But beyond this, does it serve any purpose? I believe it can. Pain is very personal, direct, and non-abstract. It pins us down into our immediate reality, and in doing so it can remind us we’re alive. I guess that’s not an entirely bad thing…