This is a bit of a hybrid post: about half of it is from my archives, and the other half from memory. (Yes, memory is an archive of sorts, but writing down your recollections is more properly called a memoir.) Enjoy please enjoy. 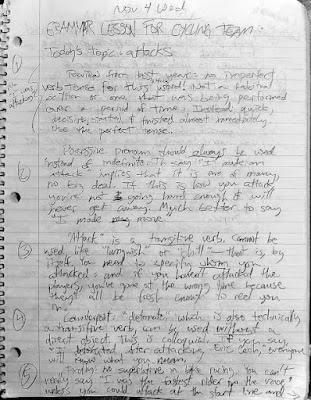 One evening over thirty years ago, I arrived early to a UC Berkeley cycling team meeting, held in a lecture hall on campus, and sat there, bored, watching the team secretary write the agenda on the chalkboard. (Remember chalkboards?) One of her items had a grammatical error, which I thoughtfully pointed out. She corrected it and then, without a word, wrote “Grammar lesson – Dana” as the next item.

Instead of saying, “Touché,” I sat quietly through the meeting until we got to “Grammar lesson,” then jumped up and headed to the stage. I doubt the secretary (or anybody else) had actually expected me to present anything, but I’d had a few minutes to come up with some material. My lesson went something like this:

Okay, first of all, spelling counts in bike racing. Don’t let anybody tell you otherwise. [This absolutely barebones gag actually got a few chuckles because the rest of the meeting had been predictable administrative stuff. As I was relieved to discover, this was an easy crowd … at least, if something like 50 people counts as a crowd. Compared to a modern collegiate road cycling roster, I’d say it does.]

My next topic involves an idiomatic expression. You’ve surely all heard the term “head down.” Look, this is just a figure of speech. You’re not supposed to actually ride with your head down; you need to look where you’re going. An old teammate of mine at Santa Barbara rode head down during a time trial and ran right into the back of a parked car. Not a pretty sight.

Finally, I want everybody here to understand the difference between a lectern and a podium. So many people get this wrong. This little stand in front of me, on which I could place my notes if I had any, is called a lectern. That is its proper name, no matter how many people call it a podium. The word “podium” derives from the Greek root “pod,” meaning foot. It’s the thing you stand on if you make the top three in a bike race. This is a crucial distinction because as you can see, any idiot can stand behind a lectern. To mount the podium, you have to earn it. I’m talking about this. [Here I stepped out from behind the lectern, pretended to step on to a podium, and put my arms up. To my surprise, my lesson was well received. And from then on, I was always on the agenda at Cal cycling team meetings.]

[This is actually somewhat from memory, because I’m looking at the notes I prepared for the lesson, which don’t amount to a full script. Side note: I didn’t actually ride with the team in 1992 … I needed to knuckle down and focus on school. But I stayed on as grammar coach. I believe this was the first team meeting of the year.]

I’ll start with some review from last year: you have to be careful with verb tenses when you talk about bike racing. There’s no room for the hypothetical subjunctive, i.e. woulda, coulda, or shoulda. Similarly, you should be aware there is no imperfect verb tense for attack. That is, attacking is not supposed to be a habitual past action, because those who attack in every race are just clowns. You attack when you realize the moment is just right, and most of the time this never happens—you’re working for a teammate who’s got the better legs, or you’re waiting for the final sprint. Meanwhile, an attack is never something that happened over a period of time, as in “I was attacking.” If the attack lasted long enough to say that, it wasn’t a proper attack … it was just an acceleration and the peloton was probably snickering at you. An attack is sudden, decisive, and explosive—it starts and finishes almost immediately (whether it gets neutralized or you find yourself in a breakaway). To describe an attack, always use the perfect tense: “I attacked,” or even better (to quote Stephen Roche), “I fucking attacked, man.”

Now: on to pronouns. Always use a possessive pronoun, not an indefinite pronoun, with this topic. To say “I made an attack” implies that it was one of many—i.e., no big deal. But think about it: if an attack is no big deal, what’s the point? If that’s how you attack, you’re not going hard enough and will never get away. It’s much better to say, “I made my move.” As in, the one real opportunity you might get.

Another thing. Always remember that “attack” is a transitive verb. It cannot be used by itself, like “languish” or “chill.” You need to specify whom you attacked (unless you’re Stephen Roche). If you haven’t attacked the real players, but merely went after the entire field before attrition worked its magic, you’ll just get reeled in. Better to say, “I attacked the remnants of the breakaway.” Note, however, that there’s a counterpoint to this: “detonate,” which is also technically a transitive verb, is properly used without a direct object. This is colloquial. If you say, “I totally detonated after attacking Eric Cech [one of our strongest rivals in the peloton],” everyone will understand.

I have one final thing to cover: there is no superlative in bike racing. No matter how well you’ve attacked, you cannot say, “I was the fastest rider in the race,” unless you attacked at the start line and opened up a massive lead that increased all the way to the finish. Trust me: this never happens (except once, before anyone knew who Eric Cech was). Even the best attack doesn’t make you the “fastest,” because it’s likely that any of a number of sprinters could have out-sped you if they hadn’t been chilling at the back and missed the break. It’s always better to use the comparative: “I rode faster than the field at just the right moment.”

In like fashion, you can’t ever call yourself the “smartest” rider in the race, even if you won, because many a smart racer has chilled at the back of the peloton thinking about grammar.