It’s still summer, which means it’s time for guacamole. If you’re interested in learning how to make it, you’ve come to the right place. Don’t bother with any of the recipes you’ll find online. My instructions are better, more complete, and best of all aren’t infested with annoying ads. Recipe websites are the worst, with nefarious pop-ups, videos suddenly springing to life, requests to access your location, invitations to mailing lists … just keep all that crap out of your life.

Following the structural tradition of my posts on homemade pasta, fettuccine Alfredo, Bolognese Ragu, and homemade macaroni and cheese, I’ll give you this guide in the (perhaps mythic) who-what-where-when-why-how format of the newspaper reporter. 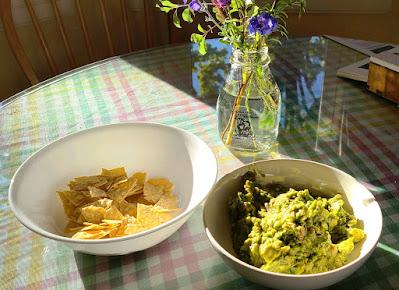 Who, where, and when

The first time I had guacamole I was a little kid. It was a bad batch made with really awful avocados that were not only basically rotten, but also really stringy. (I’ve never understood why, but that occasionally happens.) I was revolted, and decided I didn’t like guacamole or even avocados. My evil brothers encouraged my utter failure of judgment because hey, more guac for them. (I should have been more skeptical when they didn’t ridicule my taste. They pretended that their love of guac was a bizarre idiosyncrasy and it was only natural I didn’t share it.) When I finally gave guac another try, many years later, and realized the error of my ways, I was livid—at myself, of course, but also at my brothers. On some level I still haven’t forgiven them.

I didn’t learn how to make proper guac until about 1990, when I was a student at UC Santa Barbara. A Chicana friend of mine named Tina showed me the ropes, and I have zero reason to doubt her ethnic and culinary cred. (For some reason I’m more nervous about presenting myself as an authority on this Mexican dish than I am with regard to Italian food. Perhaps it’s because I once recommended a Mexican restaurant to a friend of mine who rinsed the piss out of me for its not having been authentic enough for his more sophisticated palate.)

Guacamole is something made right before you eat it, whether you serve it with chips or as a topping or both. Guac is not that homogenous over-smooth green stuff you buy in a tub, and I don’t care where you buy that. (Just because Whole Foods charges like six bucks for a paltry inch-tall tub doesn’t make it good, and scarcely makes it guac). You cannot cut corners with this food, even if the store-bought stuff is arguably better than nothing. They should have a different name for that stuff, like Avocado-Whiz.

Obviously you should make guacamole because it’s delicious. It’s also good for you, because avocados themselves are nutritious as is everything else that goes into it. And if you have a bunch of avocados that are perfectly ripe and will be rotten tomorrow, you practically have to make it. (Back when I commuted to San Francisco for work, I once called my boss and told him I had to work from home because my avocados would be perfect at lunchtime and rotten by dinnertime. As a fellow foodie, he was fully supportive.)

The best thing about guacamole is that it’s pretty easy to make. So long as your ingredients are good, all you have to do is basically get out of Mother Nature’s way. By this I mean you need to refrain from doing all the things people do to ruin their innocent produce and turn out an inferior product. Here is a list of what not to do:

So here are all the ingredients you’ll need:

I won’t bother with the quantities of each ingredient because how much you use has simply to do with the number of avocados you have, and (to a lesser extent) the number of people who’ll share it. Everything else is up to your judgment: what looks right, like what you’d see in a good restaurant? What tastes right? You can always taste as you go (chips being easier than a dozen little tasting spoons) and add more of whatever it seems to need. Experimentation is necessary and fun. If you avoid the don’ts listed above, it’ll turn out fine.

OK. To start, sink a sharp chef’s knife or paring knife into the avocado, across the middle horizontally, until you hit the pit. Rotate the avocado so that you cut all the way around, then twist the two halves apart. Thwack the knife into the pit so you can pull it out. Now slice the flesh of the avocado into rows, then go across those like a grid so it’s kind of cubed. Scoop that out into a big bowl. You’re not really going to mash this per se. By the time everything is mixed, it’ll be mashed enough. Again, you want it chunky.

It would be a shame to use mealy, pink tomatoes like what the giant supermarkets have. I suppose really good commercial pico de gallo would work in a pinch, but really you want those Early Girl tomatoes, in season. They should be bright red and so flavorful that you actually curse under your breath that you spent so much of your life eating terrible tomatoes before discovering these. Dice them into pieces roughly a centimeter on a side (though of course they shouldn’t be perfect cubes—what kind of nutjob are you?). Throw them in the bowl without the juices. (If they’re really watery you might question their quality. The non-flesh part with the seeds should be fairly gelatinous.) Can’t get good tomatoes when you need them? Not to worry. The photo at the top of this post was of a batch that didn’t even have tomatoes … it was still pretty good.

Now dice up those onions. If they’re strong, use less. And like I said before, don’t just hack them up willy-nilly. Use a razor-sharp knife and make very thin slices, like you could read through, almost all the way through the onion but not quite. Then shift it 90 degrees and slice the other way. Now turn this on its side and slice down again to create tiny cubes. Once you have a nice pile, hack it all up further, pivoting the knife around. There’s no such thing as too fine … your patience will ultimately limit you. Throw those in the bowl.

Next comes the cilantro (which is the only ingredient Tina didn’t teach me to use, probably because we couldn’t get it). Tear the leaves off the stems, wash them, and hack them up nice and fine and throw them on the pile. How much you use is a matter of taste. If you don’t put any in, your guac will still be just fine, but cilantro really does make it better.

Squeeze in some lime, and shake in some salt, and then glug in some Crystal sauce. How much of each you add is, again, all up to taste. (As explained here you should not skimp on salt in the name of good health.) If you have very young children you might go light on the Crystal sauce. (Why wouldn’t you just use cayenne pepper? Well, you could, but the Crystal sauce includes vinegar which makes your guac tastier. If you don’t have Crystal or Tabasco sauce, or are going light on that so the guac isn’t too spicy, add a tiny bit of rice vinegar for a bit of zip.)

Now, if you’ve started with beautiful ingredients, take a moment to gaze at your bowl of goodness before you mix it up. It should look about like this: 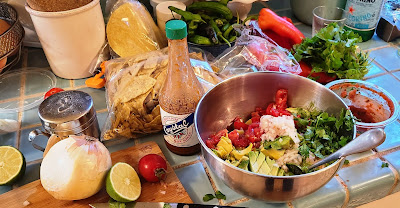 Note the fresh red and green peppers in the background of the above photo. Did those go into my guac? Nope. They’re just for show. I’m not sure what that salsa is doing there either … I was probably just eating it with chips while I made the guac, out of sheer gluttonous hedonism. By the way, I’ve noticed how modern smartphone cameras take liberties with the color, trying to make everything look better than it is. I really don’t like this about the camera software. But rest assured, my tomatoes really were that red. Just gorgeous. Note the size and shape of the Early Girl on the cutting board there. It’s not a beefsteak tomato, and it’s not a Roma, okay? If you can’t get Early Girl, get cherry tomatoes, like I said earlier. (Weren’t you paying attention?)

Now you stir everything together … not with a whisk, not with a hand blender, and not with any force. Just mix it gently with a big spoon until the ingredients are combined. Then stir it more only as needed to re-mix as you adjust the flavor. The great thing about making guac is that you can just go crazy fine-tuning it by adding more of this or that ingredient, tasting all the while by dipping in chips. If half of it’s gone by the time you declare it officially done, that’s not such a bad problem to have, innit? I mean, you’ve just had this blissful kitchen time…

Here’s what the finished product ought to look like: 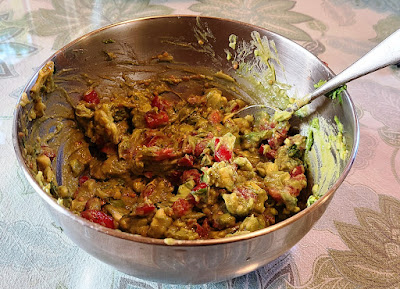 If you’re serving this at the table, you’ll want to move it into a nice clean bowl that’s just large enough to hold it all. (This provides the added benefit of giving you, the deserving chef, the opportunity to clean out the mixing bowl with a rubber spatula like a cat licking her paws.) I took a final photo of my latest batch in a nice white bowl, but I won’t post it here. The phone software went nuts and enhanced the color to the point it almost looked like the guac had M&Ms in it. This was a ridiculously brazen act of auto-retouching and I cannot deceive you like that. Maybe next time I make guac I’ll get out my real camera and snap some more photos to post here. Sheesh.

Now, one of my favorite things about making guac is the way you get people to eat it. If your household is anything like mine, all you have to do at this point is say, in voice only slightly louder than normal conversation, “There’s guac.” You’ll witness a stampede as your family members descend on the bowl from every corner of the house.

Oh, one more thing: don’t serve your guacamole with lame national-brand chips like Tostitos—it deserves better. You don’t need to go full-yuppie with chichi brands like Late July either. Get that weird brand whose label is in both English and Spanish, if you’re lucky enough to live somewhere that offers such a thing. (I have no idea what people do in, like, Vermont.) My favorite brand is a local one, Casa Sanchez, that offers both thick and thin varieties. Find the chips that look like what you’d get at an authentic taqueria, not what you’d get at a Super Bowl party in Cincinnati or Green Bay. 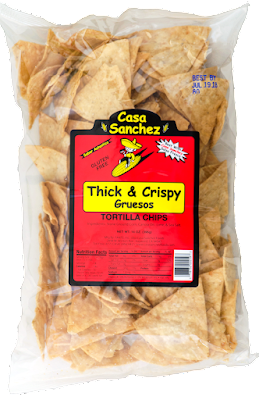 If you follow these directions, don’t be surprised if your friends and family gush about how great your guacamole is, like you’re some kind of legit chef. It would be deceitful to accept the credit, though, given that all you did was cut up and combine some basic ingredients. Reply modestly, like, “Oh, I didn’t make this. God did. I just assembled some stuff without screwing up.”