From the Archives - My Front Derailleur Tragedy

In some ways, 1995 was a tough year for me. After the beautiful freedom of the cross-country bike tour that had taken most of the previous year, I was hunkered down and working hard in a nowhere job at a consulting firm. During my recruitment with this company, knowing they’d smoke me right down to the filter if I let them, I insisted that I be eligible for overtime pay. Several of the workaholic engineers dragged me along with them into fifty-hour workweeks—and, being paid time-and-a-half while saving to buy a house, I was all too happy to oblige them. I managed very little work/life balance.

This meant, of course, that my racing bike was sorely neglected, in every way. I was riding only two or three days a week, and wasn’t taking the time to keep the poor bike tuned up. (It didn’t help that my 450-square-foot San Francisco apartment didn’t have anything like a garage, and though I still had a workbench whenever I needed one at the shop where I’d worked in college, that was across the Bay in Berkeley.) My body fared as badly as my bike. When I did ride, the sport felt like something I used to do. That’s the landscape for the sad tale that follows. (This was not a blog post, as those didn’t yet exist, but an excerpt from an email to my brother Geoff, on which I’d cc’d half a dozen friends). 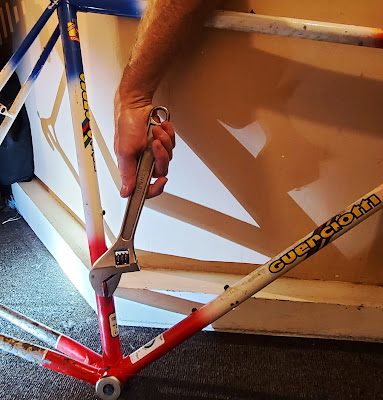 I gotta tell you about my front der. (“Der” seems to be the new bike shop lingo for derailleur. I still prefer “mech,” which is what my favorite two Square Wheel colleagues, illegal immigrants from England, called them. Customers sure got confused.)

During a recent evening ride, I got a flat tire on the Golden Gate bridge. I wasn’t worried, for I had not only a patch kit, but a spare tube. Well, the spare tube had a damn hole in it so I opened up the patch kit. It hadn’t been used in well over a year (since before the big bike tour) and the glue had completely dried up. So I tried to flag down anybody passing by, and all these bikers with bulging seat bags just blew by, ignoring me completely, perhaps because of their fiendish concentration in fighting the wind that always blows around the bridge towers (where I had set up, for shelter from that wind). Finally a woman stopped, and admitted with embarrassment that she had all the tools I’d need, but hadn’t the foggiest idea what to do with them. I offered her a free lesson in exchange for a patch.

Well, I repaired the tube, no problem, and the Samaritan pedaled off into the sunset (almost literally), but then the damnedest thing happened. When I went to reassemble my bike, my chain had locked solid between the right crankarm and the chainring. Nothing I could do would free it. It was just stuck. At first I gingerly poked at it, not wanting to get my hands filthy (as my chain was in sorry shape—like Dad’s chain, with that ten-years accumulation of black oil and grit on it). Then I poked harder, pushed, pried, and eventually found myself ripping at the chain furiously, and somehow managed to severely lacerate my finger. Blood was absolutely spurting out of it—all over the ground, the chain, the crank, the pedals, everywhere.

Now I was truly furious, and started trying to roll the bike backwards to kind of roll the chain out. No dice—all I accomplished was to get blood and black grime on my handlebar tape and saddle. So I carefully tried to pedal the bike forward. Nothing. Blood shooting everywhere, hands a grotesque red-black color, my composure completely gone, I finally jammed my foot down on the pedal in a burst that I hoped would break the chain in two but at least end the stalemate. Well, the chain held fast, but my Shimano Dura-Ace FD-7403 (cutting edge!) front der somehow got snagged and was bent horrifically!

Now, this wasn’t just any derailleur. It was also kind of a trophy. You see, all the way back in 1989 I’d somehow broken [our brother] Bryan’s Dura-Ace front derailleur, and our boss at the shop assured me Shimano wouldn’t warranty it. I begged him to try (as lowlife mechanics like me weren’t really supposed to talk to the industry sales & service reps ourselves). He wasn’t interested, and in the meantime I had to buy Bryan a new der. But I always vowed I’d warranty the broken one and keep the replacement for myself. Finally I got around to it, years later when working at the Square Wheel, and thanks to my (nearly authentic) original sales receipt, I prevailed. (I had to fill out some form and describe the failure, and all I remember of my report was the conclusion, “I am incredulous.”) A beautiful spanking new 7403 front der was my prize. It’s the braze-on version, so compact they had to bend the logo around. 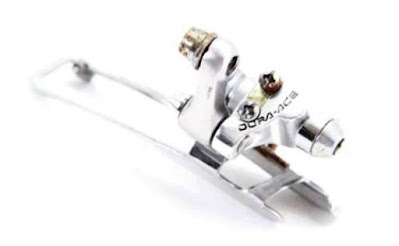 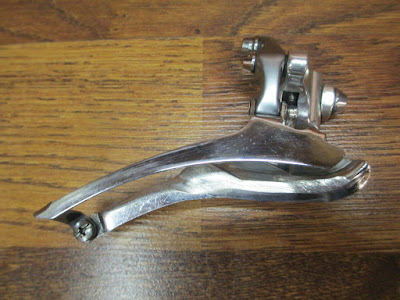 This was the most modern, sophisticated part of my entire bicycle, and now it was utterly ruined! And as if that weren’t bad enough, the bizarre mishap had also bent my derailleur braze-on all to hell! Now I was so enraged . . . words cannot describe it. I was like that guy in “Midnight Express,” rotting in the Turkish prison until he can’t take it anymore, who finally loses it and tears some dude’s throat out with his teeth. I grabbed that chain with my bare hands, and in a feat of strength matched only by Samson’s when he crashed down the coliseum around him, I broke that chain in two! So complete was my frenzy when I accomplished this that I continued the fluid motion, hurling that chain, discus-style, right over the railing of the bridge. I can only assume that in its trajectory downward it sliced off the arm of a fisherman in a small boat below. Needless to say this is by far the most irresponsible thing I have ever done.

Now before you condemn me for this brazenly stupid and highly illegal act, let me tell you I know exactly how illegal it is, from my job. We do risk management of offshore oil platforms and part of that is publishing all the safety regulations, which also delve into various oceanic legal realms like pollution, and on a slow day I’d read with fascination (okay, mild interest) how steep the penalties are depending on how close you are to land. Far enough out in the ocean, you can pretty much dump whatever you want, even an entire military helicopter, but if you’re caught dropping so much as a paper clip within sight of land, you’re practically pilloried. Well, what can I say? I’d completely lost my shit.

Did this awful act immediately come back to bite me? Did a Coast Guard cutter suddenly appear? Or did I face karmic payback, like my back suddenly going out? On the contrary, just as I set off toward home on my bike, flailing at the ground with one foot like a damn skateboarder to propel myself, two cyclists rolled up, assessed the situation, and offered to push me along. “You live in the city?” one asked. I said yeah. “What neighborhood?” I told him Russian Hill. “We’ll get you home. That’s on our way,” the guy declared. And they literally pushed me the whole way back!

When I got home, I violated all the rules of bike mechanics: 1) I worked when angry and frustrated; 2) I didn’t have enough light; and 3) I was so mad I couldn’t even remember the third rule, nor do I remember it now, so how could I have followed it? At stake was my pride and joy: the Ten Speed Drive Team Issue Guerciotti SLX. If I screwed up bad enough trying to straighten the derailleur hanger, the frame would be ruined.

On the plus side, Bonney was there to help me. Bonney is an old friend of mine: a giant, 12” croissant wrench, built in the USA to the stringent mechanical tolerances of a Lexus. Years before, at mile 95 of a century ride, I’d spotted Bonney lying on the road, and I was so tired I actually considered just leaving her there. I pondered the matter for a fraction of a second before turning back and swooping down to pick her up and carry her home, my trophy. She’s the pride and joy of my toolbox, which is impressive considering I have all kinds of Campagnolo tools, even the famous R-tool that straightens bent rear derailleur hangers. Alas, there is no purpose-built tool for straightening front derailleur braze-ons.

I had that dead Dura-Ace 7403 derailleur off in a jiffy, and then set about, hands still shaky with anger and drooling blood, to use Bonney the Wrench to straighten that braze-on. Almost sick to my stomach, I envisioned the braze-on snapping off, leaving a gaping hole in my frame. This horrific vision ended with a little window popping up in my brain—an instance of the saddest, most absolutely lugubrious computer error message ever, which I see from time to time when using my CompuServe Information Manager software: “Could not recover from failure.” Like the epiphany of a Generation X-er who dies of a drug overdose.

But instead, I came through. Anything I’d ever wanted to have and didn’t get was suddenly erased at that shining moment. Gone were the restrictions of original frame design; in a Zen moment I became the artist, hand-crafting that braze-on the way I myself would have wanted it in the first place, like the Platonic ideal of front der braze-on. You see, my frame—quite intelligently for a frame of its size, bless those wonderful Italian craftsmen—has a rather shallow seat tube angle, which makes for the perfect positioning for a tall person with a high femur-to-tibia ratio. Unfortunately, it makes for poor front shifting when the front derailleur braze-on is set parallel to the tube (which they all are, as far as I know). The front part of the derailleur cage is too far from the chainring teeth, you see. Well, I bent the braze-on to just the right orientation, a bit clockwise from where it had been originally, and though a bunch of paint flecked off, it was chromed underneath anyway.

I dug through my box of old bike crap looking for a replacement der, and found not one but two of them. How? Why? It’s like the old parts in that box copulate or something. Upon inspection I discovered both ders had something wrong with them, but between the two I cobbled together a working one. It was a grotesque low-end Campy number; I’d given up on that entire brand when the founder’s playboy son Valentino took over the business and created all the low-end lines like Victory and Triomphe. This cheap, ugly der was a disgrace to my beautiful bike, so to compensate I put on a spiffy new nickel-plated Dura-Ace chain that I was saving for my fiftieth wedding anniversary. When the repair was done and I’d cleaned most of the blood and grime from my hands, I went out for a test ride, and now my bike—she runs like a top. I don’t know if it’s the new derailleur braze-on angle or the Dura-Ace chain, but the Campy front der shifts great.

As for the mangled Dura-Ace 7403, it’s still beautiful, in its broken, tragic way. If you ever need spare parts from it, let me know. For now, it’s just another museum piece taking up space in our small apartment, without a jewel case or alarm system to protect it and show it off properly.