When it comes to exercise, I’m a disciplined person. Last quarter, I managed some kind of physical activity for 89 out of 90 days, and I rode my bike 51 times (that is, four times a week). Would it surprise you, then, to learn that I struggle to find the motivation to exercise pretty much every single day? This post documents that struggle: why it persists, and how to overcome it. 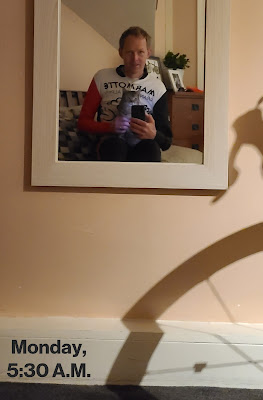 Among those of us fortunate enough to have the spare time and energy to exercise, I don’t think there’s anyone who’d dispute its benefits. Articles on this topic pepper my inbox and browser constantly, like one of those machines that shoot tennis balls. For example, today I stumbled on this one providing eighteen reasons to work out (among them higher energy, better mood, better sleep, better sex, lower anxiety, and lowered dementia risk). I really have no philosophical issue with the practice of exercise; I’m totally on board with the program.

Why, then, is it so hard to motivate myself, in the moment—to actually get out there and ride? You might answer, “You’re just lame, Dana!” but you know I’m not alone in this. We all struggle, as is documented every year in articles about failed New Year’s Resolutions. I think the problem comes down to gumption. You can resolve, at a macro level, to follow an exercise regimen, but that’s the easy part. As I’ve mentioned before in these pages, the intellect is adept at contriving lofty resolutions, but when it comes to remembering pain and suffering, the less sophisticated lizard brain is more realistic, and exerts an awful lot of influence over the organism as a whole.

Don’t get too hung up on “lizard brain,” by the way. I realize I’m no expert on brain science, but this is a useful concept metaphorically. The point is, the rational part of our brains fully grasps the many benefits of exercise, but it has to argue with the older part of our brain, that evolved over a couple hundred thousand years and understands the need to conserve energy, in case of famine. Sloth actually produces dopamine. To overcome our laziness impulse, then, requires gumption.

A basic dictionary definition of gumption is “boldness of enterprise; initiative or aggressiveness.” For more nuance, I like how Robert Pirsig describes gumption in Zen and the Art of Motorcycle Maintenance:

If you’re going to repair a motorcycle, an adequate supply of gumption is the first and most important tool. If you haven’t got that you might as well gather up all the other tools and put them away, because they won’t do you any good. Gumption is the psychic gasoline that keeps the whole thing going. If you haven’t got it there’s no way the motorcycle can possibly be fixed.

Even more helpful to this exploration is Pirsig’s concept of gumption traps. Pirsig points out that gumption isn’t “a fixed commodity” doled out at birth; it is, rather, “variable, a reservoir of good spirits that can be added to or subtracted from,” so we can define gumption trap as “anything that drains our enthusiasm.” He defines two main types: 1) setbacks, which are those caused by external circumstances, and 2) hang-ups, which derive from “conditions that are primarily within yourself.”

Where ego is concerned, it’s surely easier when we can blame setbacks for not exercising. For example, you figure you’ll exercise when you get home from work, but then you end up working late. Or, you get home from work and realize you’re too tired to work out, so you decide, “I’ll do it tomorrow instead, without fail!” (This little subroutine, of course, gets you nowhere.) Or, your buddies talk you into getting a drink after work, or your spouse/other has made a nice dinner or wants to go out. Or, or, or…. It can seem like almost anything can short-circuit the mythical evening workout.

Of course, many of these setbacks could be overcome; for example, did you really need to work late, or did your deep-seated fear of pain and suffering trick you into pretending there was work to be done? (Working from home may well increase the likelihood of this kind of rationalization.) For me, most of the struggle is around the non-circumstantial cause of not riding: that is, it’s the internal hang-up.

Pirsig, who jokes about starting “a whole new academic field, gumptionology, in which these traps are sorted, classified, structured into hierarchies and interrelated for the edification of future generations and the benefit of all mankind,” identifies a variety of internal/hang-up gumption traps. The most germane one to my study of exercise resistance is anxiety, which he describes thus:

You’re so sure you’ll do everything wrong you’re afraid to do anything at all. Often this, rather than “laziness,” is the real reason you find it hard to get started. The gumption trap of anxiety, which results from overmotivation, can lead to all kinds of errors of excessive fussiness.

“Do everything wrong,” in Pirsig’s context, refers to screwing up a motorcycle repair, since that’s his central metaphor. But the concept applies also to sport, in the sense of performing poorly. In theory, only competitive athletes would care how well they go, one day to the next, but the widespread success of Strava proves otherwise. For anyone who used to race or still dabbles, the habit of monitoring, evaluating, and documenting our performance is deeply embedded. We don’t just want to get out on the bike; we want to ride well, we want to shred some gnar’, we want to put the pussy on the chainwax! This, to continue Pirsig’s concept, is the overmotivation. Which is why, as ride time approaches, we get anxious. At least, I do.

Ageing can compound this anxiety, because as we get older our bodies become less predictable, so heading out is like tossing the dice. Overmotivation aside, anxiety accrues because when we aren’t going well, a bike ride can be a pretty miserable affair, at least in the Berkeley hills where I ride. Based on my bike’s gearing I’m forced to suffer—there’s no taking it easy. If I’m not on a good day, this isn’t a matter of mere disappointment; it’s a case of Mother Nature kicking my sorry ass. Sure, when I have good legs (or “positive sensations,” in pro racer parlance), I get all kinds of adrenaline and endorphins and I “don’t feel the pedals,” as they say. Other days, it’s a brutal slog—and alas, I never know beforehand how it’ll go. No wonder I get anxious.

Does this lead to excessive fussiness? Well, that’s part of the problem: I have to mix my energy drink, suit up, check over my bike, clean the last ride’s sweat off my sunglasses, etc. but that’s not the real issue. (Pirsig, remember, happened to use motorcycle repair as his example, which surely is a much more complicated affair.) With working out, the excess is in rationalization, in pretending you’re too busy at work, or that you’re too tired, or that you should be worried about that sore throat, etc. Etc. Etc. A friend of mine used to like to say, “Listen to your body.” To which I reply, “Ignore your body. It’s a fricking liar.”

So what is to be done?

“Ignore your body.” Sounds kind of harsh, doesn’t it, like a dickhead coach or drill sergeant? Yeah, I was playing around, but only sort of. The fact is, self-loathing can play a part in this internal gumption trap dynamic. If excess motivation leads to anxiety, which in turn leads to procrastination or rationalization, and then the ride doesn’t happen, it’s natural to feel disappointed in oneself. To some degree, this disappointment serves a valid function: it inspires us to try harder next time. It’s a hedge against shameless laziness.

On the other hand, being more compassionate with oneself can help temper that excess motivation, to reel it in a bit, and perhaps reduce the anxiety. As I prepare for an evening ride (since, notwithstanding  the photo above of me procrastinating with the cat, my workday now starts too early to ride beforehand), that inner voice starts saying, “What if you’re not recovered from the last ride? What if your legs are shit?” My more compassionate side needs to answer, “Who cares. I’m not out to set any records or beat anybody. It’s enough just to ride.” Of course, this is easier said than done, which brings me to my next strategy: scale down the difficulty.

I stumbled on this by accident. One day, not feeling great, I skipped my first big climb, South Park Drive. Instead, I descended Wildcat Canyon Road. Such a cop-out! I was actually coasting downhill at the very moment I was supposed to be flogging myself going up! What a delicious sense of relief!

Of course, I still had to get back up over those hills to go home, which could have meant going up El Toyonal and Lomas Cantadas, which isn’t only a harder climb, but is harder to write a poem about, as explained here. Rider’s block and writer’s block at the same time! But instead, from El Toyonal I took a little bail-out road (part dirt) to get back to Wildcat, and thus a new route was born. It follows the dotted line labeled “cutover” below. Click the image. (Click ‘em all.) 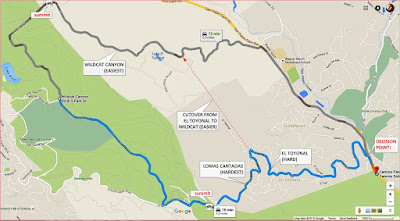 Even though on most days I could do a much harder ride than this, I almost never do. If I finish my ride wishing it’d been longer, I’ll be that much more motivated the next time. This is how I “act my age” while still being an active guy. (And no, self-compassion will not make you a wuss.)

If you don’t feel like taking my word for it, here are some schematics showing how much easier my current standard route is from the route I did for like fifteen years, which I called the “Hill Climb Extravaganza,” aka HCE: 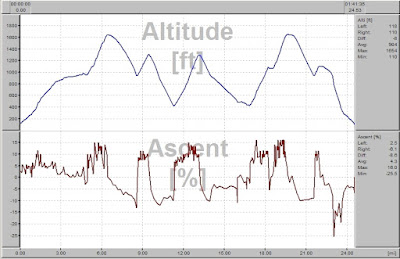 The HCE entails more than 4,000 feet of vertical gain in just under 25 miles. The modern ride climbs only 2,100 feet, in just under 21 miles—it’s basically only half as hilly.

But wait, there’s more. It’s not enough just to cut myself some slack due to age; since my tired days are really slow and awful, I have to make sure they don’t leave a bad taste in my mouth. So I also cut myself a deal: going into every ride, I promise myself that if I’m really riding badly, I’ll cut it short, shamelessly and unapologetically, even if that means turning around abruptly and retracing my route. After all, any ride is better than none.

Does this work? I wish I could say my scale-it-back protocol completely wipes out the gumption trap and the daily dread of the workout—but it doesn’t. For some reason, even though my rides are almost always fun, and I’m always glad I did them, I still routinely struggle with motivation beforehand. However, I’m almost never snared in the gumption trap—my system gets me over the hump, almost every time. And once I’m out there on the road or trail, if I’m feeling good, I give myself a jolly good thrashing. You don’t need a long ride to get a killer workout, after all … and prevailing in this daily struggle is what keeps me from becoming a mere former athlete.