My older daughter suggested this post. She says tier lists are insanely popular. I can’t figure out what the attraction is, but I don’t exactly have my finger on the pulse of … well, anything or anybody. So what the hell, I’ll give it a whirl.

A tier list is basically a ranking of things from best to worst … I think. It started out with video game characters (protagonists?) that gamers rank based on how tough, fast, or skilled they are, I guess. “S” is the best and, according to Wikipedia, “may stand for ‘Special,’ ‘Super,’ or the Japanese word for ‘Exemplary’ (秀, shū).” Next down from S is A, followed by B, C, D, E, and then F, like with grades. (Never mind that students never get an “E” grade, though I once got an F+ on a bio quiz.)

How does one consume these lists? I have no idea. All my google searches simply turn up tier list generators. It’s like everyone is an author and nobody is a reader. I guess if I were on social media I would be exposed to actual lists. My daughter suggested YouTube and I found “Schlatt’s Cereal Tier List,” a 14-minute ranking of breakfast cereals, to be fairly amusing. I suppose this Schlatt guy knows what he’s doing, because his video has over 13 million views, which is even more eyeballs than my fart jokes post got. (Roughly 26 million more eyeballs, if you want to get precise.)

The example tier lists I’ve seen from the various list generator websites are pretty boring; for example, one that ranked best to worst candy (Snickers and M&Ms at the top, Jelly Belly at the bottom) seemed totally arbitrary.

I got lost pretty quickly trying to find the perfect tier list generator. A site called tiermaker.com had lots of ads, including a video that actually had sound, at a super obnoxious volume. It was an ad for edible.com, whatever that is. I will never know, because their jingle, and the very fact of their jingle, are so annoying I’m banning the company for life no matter what they’re hawking. And when I tried to mute the video, it darted away from me, nefariously.

This site had an insane number of templates. I thought these would just provide background stuff, splashy graphics and fancy fonts, so I chose what I thought would be a playful, fun, modern, and worldly template: “Genshin Impact Characters.” But actually, this “template” was actually a full-blown list creator whereby you drag little characters up to the grid to rank them. But how could I possibly have any opinion about any of these little avatar dudes? 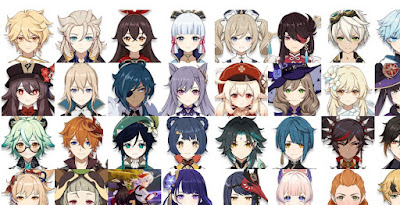 I tried a few more sites and found all of them more or less tedious to work with. I honestly don’t care much about colors, fonts, or little photos I have to drag around. Nevertheless, I persevered, and eventually created…

I finally took some time on a site, edit.org, and created a list of THE BEST ANIMALS, just as a proof-of-concept. I don’t have particularly strong opinions on animals, nor am I really an expert, but for what it’s worth here is my very first tier list: 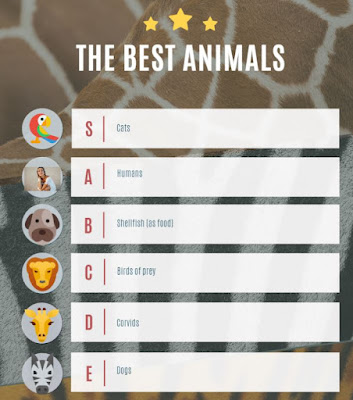 I hope you agree with my ranking, or—better yet!—vehemently disagree with it, so you can fire the first round in a fusillade of angry comments below this post. As for the quality of the list itself, I know it has plenty of flaws. The most glaring, perhaps, is that the picture next to each item doesn’t match the item, except in the case of Humans. The photo library on the site happened to have a free image of a human. But all the other free images I scrolled through didn’t happen to be of a cat, a shellfish, a bird of prey, etc. I searched the image library for “cat” and was told, “Register to browse millions of free photos and images.” Like hell I will!

Well, there’s almost nothing I won’t do for my albertnet readers (other than actually travel anywhere to research anything, or spend money, etc.) so I settled on what appeared to be the most promising site, Canva, and actually registered, and in relatively little time put together what I hope you’ll agree is a better effort:

The problem is, at heart I’m more of a writer than a graphic designer, thus I still found the process tedious. It’s also the case that there’s no easy way to add footnotes, and yet I’m sure you’re dying to know why I ranked human flesh over, say, soft drinks. (If you’re wondering about “sand,” it’s a reference to “Raising Arizona.”)

I really feel I need a template with more room for text (unless I decide the go the vlog route like Schlatt with his cereal). And so I created…

I needed a template that could be squished, stretched, and otherwise modified at my whim, without some website reigning me in. So, I messed about with tables in Word, with the idea of turning them into simple graphics. Here’s a more verbose take on Dining Options, to showcase my new template.

Now that I have an EZ template, I can go crazy on my tier lists! Here’s one that just occurred to me:

I suppose there’s no reason I have to go with the S/A/B/C/D/E/F scale. Let’s mix it up a little:

I could go on and on with such lists, but if there’s one thing I’ve learned from my readers, it’s that my posts are “too long.” Well, this is probably my shortest in years … are you happy now?