Let’s get one thing straight: I’m not one for crossword puzzles, Sudokus, etc., and I’m certainly not looking for new ways to spend time with my smartphone. I’d rather create than solve, and as regards the digital realm my typical advice is to log off and do something useful. And yet, here I am, recommending the Wordle as a fun little puzzle and a way to (gasp) connect online.

I’ll save you a google search: Wordle is a word game you can play on the New York Times website. Every day they put up a new puzzle (i.e., a new word you have to guess). You can learn how to play in about 30 seconds and don’t need a subscription or login or anything. And because it’s the same word for everyone, you can compete with others.

Why I resisted Wordle

Here’s my introduction to the Wordle. My brain was very tired after a long workday when my phone, annoyingly, bleeped at me. At first I didn’t react. I couldn’t handle it. These stupid phones hector us all day long with all their notifications … such an intrusion. And yet, people seem to welcome this. It’s like those whackos who put ketchup on a hot dog.

After a delay—designed to convince myself I’m not my phone’s bitch—I swiped down to check the notification. Lo and behold, it was actually something good: a text from my daughter Alexa! “You ever try the NYT Wordle?” she’d written. “Seems like it would be right up your alley. We can compete to see who solves it in the fewest moves.” She followed this with a little devil emoticon.

I instantly recoiled. As I said, I don’t like puzzles. My only exception is the Jumble (i.e., anagram) in the newspaper, which I’ll do only because I can generally solve it in like 30 seconds (and if I get stuck on any of the words I just shrug it off and bail). Since the Wordle has similarities to anagrams, my daughter thought I’d like it. But “we can compete” is not necessarily an attractive proposal when coming from her … she’s a born competitor, and when we play cards she usually wins. Sometimes I’ll lose like two or three games in a row and think, what’s the point? Hasn’t it been definitively established that she’s sharper? Is this Wordle thing just another way for her to lose respect for me—to roll her eyes at the terrible toll age is taking on my brain?

I started to text my daughter back but got fed up with the tedious process of typing on my smartphone. “Maybe ugh h hmm if did it to to I’d fffd go to that position,” I texted. I was freestyling, roaming randomly across the keyboard and blindly accepting autosuggestions. I could not go on. I put my phone away for the night.

Upon reflection the next day, I decided I’d been rude, and to make amends I relented and tried the Wordle. Surprisingly, I liked it right away.

Here is my first-ever Wordle result: 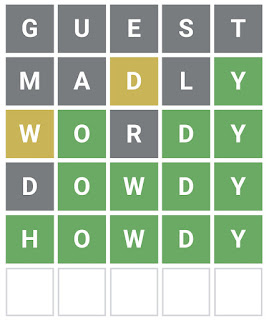 My first guess was a complete wash: all the letters in my trial word were wrong. At first it seemed like I’d just totally wasted one of my six tries, but actually, I was making progress: I’d ruled out two of the five vowels and two rather common consonants. I have to admit, the minor triumph of gaining useful information, even without the reward of a yellow or green tile, was refreshing given how often these days (in non-gaming scenarios) I feel like I’m just treading water.

With a game like chess, I never know how to proceed, but with Wordle I was able to continue making decent guesses based on a combination of logic and intuition. And, as you can see, I did solve the puzzle. Nowadays, with around thirty Wordles under my belt, I wouldn’t be pleased about needing five guesses, but in the moment I felt satisfied, and I hadn’t had to work very hard.

But the really fun part was comparing notes with Alexa. She took five tries too, and I got to look at her finished card and note her strategy. This is one of the other really cool things about Wordle: you “show your work.” It’s not like with a crossword, maze, word search, Bingo, or Sudoku, where all completed puzzles look identical. With Wordle you get a sequential view of how the solution was achieved. For example, Alexa used “MODUS” which is barely a word, in the sense that we kind of stole it from the phrase modus operandi which is not technically English. Obviously lots of words have such origins (e.g., café, alumnae) but really, when’s the last time you heard somebody use “modus”? Probably Alexa wasn’t hoping to solve the puzzle with this guess, but was testing two vowels in one go, which is smart.

As noted in these pages (here, here, and here), I’m not a fan of social media and texting. I didn’t even let my kids have phones until they were like 18, and my younger daughter still doesn’t use one. But it’s nice to have some contact with Alexa, especially since I’m an empty nester now, and the Wordle is a good excuse to check in daily, and a convenient method. A phone call requires both parties to be available concurrently, which is rare.

Try this with your college kid: send a text saying, “Is everything okay? Do you need anything? What’s new? Are you making friends? Getting enough sleep?” My guess is you won’t get much of a response. But the simple message “Wordle in 4” is either throwing down the gauntlet (if you’re first), or inviting your kid to compare her result, which kicks off a nice, easy dialogue. For example, looking at Alexa’s solution to that first Wordle, I noticed something in common with mine: we both tried “DOWDY.” I texted, “Great minds think alike, and so do ours, apparently!” This earned me an LOL, which is arguably the quintessential affirmation of our time. Which brings us to…

On October 28, I got this Wordle result: I was surprised by a couple of aspects of Alexa’s strategy with this one: 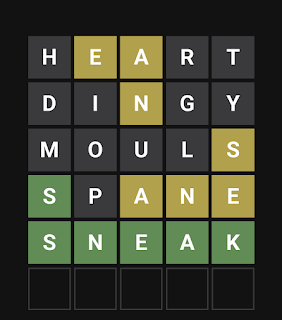 First off, she didn’t carry forward the E and A from her first guess. This ruined her chances of solving in two tries, but then how good were those chances, anyway? (More on this later.) And then she “guessed” MOULS, which is not a word. I mean, okay, it’s recognized as a valid Scrabble word, and Wordle accepted it, but what the hell? I’ve never heard it, and the dictionary app on my phone doesn’t have it. The prospect of winning in four moves didn’t seem well served by this entry. Neither did her next “guess,” SPANE.

Well, even though MOULS didn’t gain her much in this round, she tried it again a day or two later. I texted, “Mouls cannot be a word, can it?” This, combined with a random photo of our cat, kicked off a nice dialogue:

Thus did MOULS become a thing. A week or so later I crashed and burned for the first time, on the word PINEY, which seems about as abstract and non-wordlike as MOULS, but which Alexa somehow got in a mere three moves. I was devastated. Yeah, of course I recognize that this is just a silly game, with nothing hanging in the balance, but man … I just felt so defeated and low, especially when I compared our cards: 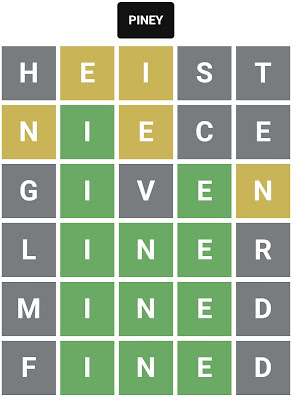 I complained, “You’ve got better mouls.” She replied, “Yeah, you’ve gotta embrace the mouls!” She tried to console me: “Well, at least you don’t have a year-long streak that got broken! Relatively early for a miss.” I replied, “Now you’re just rubbing it in.” She came back with, “Sorry, my intention is not to cause further mouls!”

I looked some more at my losing card and realized my last guess was really stupid: I’d put a D in it even though Wordle had told me there was no D. I had just been swinging wild, in desperation. I was also growing increasingly irritated at my own irritation. Why get all bent out of shape over a stupid game?

“No worries, the whole thing is just a pain in the mouls anyway,” I replied. What a useful catch-all word this was proving to be. And just like that, it’s entered our private lexicon. (Well, not entirely private: as Alexa has noted, her Autofill now suggests “mouls.”) A week or two later when I nailed a Wordle in three tries, she texted, “The mouls were with you today.”

Can the Wordle change us?

Some weeks into our Wordle dialogue, Alexa texted me with a discovery: “Did you know Wordle has a hard mode? You need to use every known letter in each word.” I replied that this is what I’ve always done anyway, risking the heartbreak of failure for the prospect of a better score (i.e., fewer guesses). So she switched over, with the eventual result that she crashed and burned—for the first time—on BAKER, which is one of these deadly words that offer too many possible candidates. For example, in this case you could waste a lot of tries on words ending in –AKER (e.g., FAKER, MAKER, TAKER). Ruling out several possible leading consonants with one “guess” (that wouldn’t, couldn’t include known letters) would be safer in this case.

But notwithstanding the end of her streak, Alexa came to embrace the riskier path that can lead to greater glory. I put forth that playing in the easier mode would be “like riding [your bike] up Wildcat when you could ride up Lomas Cantadas.” Alexa, who has suffered on both climbs, saw my point: “Time to go big or go home,” she replied.

I’ve only been at this about a month, but I’ve had some fairly odd games. Look at this one: nothing but green. 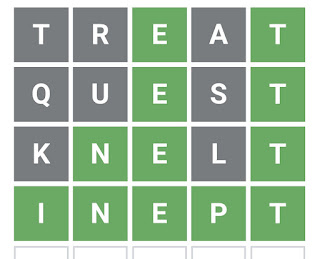 And here’s its evil twin: 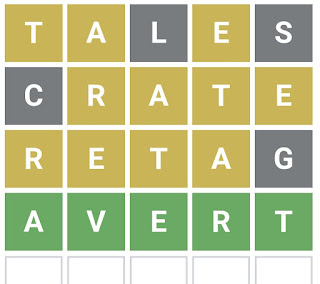 And finally, check this out: 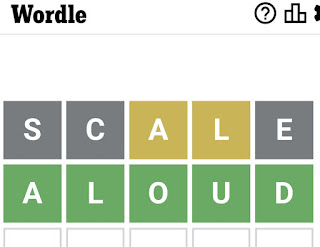