Family Shibboleths: a Glossary of Albert-isms

This post is available as a vlog, for those who prefer to listen rather than read, and/or who appreciate the “non-verbal” elements of communication:

But f you’re old-school and have no time or patience for videos, read on!

Family Shibboleths: a Glossary of Albert-isms

Last week I hosted my mom, two brothers, assorted nieces, and a nephew for Thanksgiving. My niece Laura brought this custom-made Bingo card: 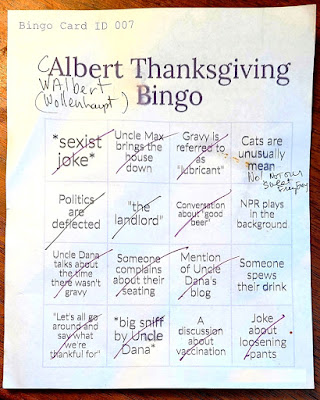 (A little explanation: CAlbert means a California Albert; WAlberts are the Washington state Alberts; and the Wollenhaupts are other relatives from my mother’s side that came for lunch the next day.)

I dig this family Bingo concept. It’s a nice way to celebrate the little idiosyncrasies and oddities that make a family feel close. We didn’t actually compete at family Bingo; that would have required fourteen unique cards and people would have had to carry them around the whole time. Instead we just had the one card, posted to the fridge. As you can see, we fell just short of getting a complete blackout.

I think there’s room to refine this game and make it a tradition. First, we could have a card for each person, up on the fridge, and anyone could mark things off (that’s right—helping one another try to win). Second, we could improve on what goes in the squares. “Cats are unusually mean,” for example, could never apply in this household, because a) we have just one cat, and b) what counts as “unusually” mean, given that all cats are asocial predatory beasts?

Meanwhile, “NPR plays in the background” could apply to many a Bay Area home, but not mine—I dislike talk radio of any kind and there’d be no way to hear it over the din of this many Alberts anyway.

(As for the final missing square, “Someone spews their drink,” apparently the only reason this didn’t happen was that my nephew Peter couldn’t come; I’m told he “seems to make it his mission to make a sibling or relative laugh explosively while drinking, hoping that said drink will spew out of said relative’s nose.” Peter stayed home as he was required by his megalomaniac coach to attend basketball practice on Thanksgiving Day, just to kiss the ring and demonstrate that sport comes before family. But I digress.)

The family Bingo game got me thinking about why family gatherings are so enjoyable. For one thing, we get that comforting sense of belonging, of being among our tribe. The quirky, idiosyncratic lingo we tend to throw around helps cement this. (Of course my family isn’t alone in this; Roz Chast recounts here how she polled her friends to learn what term their families use for picking thru the fridge instead of cooking a meal; in her household they call this “fending.”)

I think of such linguistic peculiarities as a family shibboleth. In case you haven’t heard this term, Wikipedia defines it as “any custom or tradition, usually a choice of phrasing or even a single word, that distinguishes one group of people from another.” Of course, I mean shibboleth in a good way; the origin of this word, from the Old Testament, is actually pretty dark: after a battle between the Gileadites and the Ephraimites, any Ephraimite refugees who were intercepted were challenged to pronounce “shibboleth,” because in their dialect it sounded like “sibboleth.” Anyone who pronounced it this way was identified as the enemy and immediately killed.

Clearly this isn’t the point where family gatherings are involved; naturally we want everybody well-versed in our lingo. Generally our members pick it up easily enough. For example, early in the visit when I asked my youngest niece, age nine, if she liked butter, she looked puzzled and said something like “um … sure,” instead of the right answer which is, “yeah …. mmmmmbutter” … but when I asked her again three days later she responded correctly. Notwithstanding her swift adaptation, the family lingo can certainly be bewildering to a newcomer, and my niece Laura, recently engaged, asked me to create a family glossary for her fiancé’s benefit. Any time somebody asks me to write something, especially on the subject of words and wordplay, I find the prospect irresistible (as you can see here and here).

And so, I’ve compiled a glossary of Albert-isms, replete with etymologies. What does this have to do with you, the lay albertnet reader? Well, for one thing, if you’re reading this, you’re probably my mom, or perhaps one of my brothers. And even if you’re not, you ought to find these amusing. Moreover, I’ve witnessed family gatherings where people were too quiet or seemed lacking in family shibboleths, so I hereby give you permission to totally steal these and introduce them into your own family dialogue. (If any of my family members don’t like this, they  can complain in the comments area below, or on their own social platforms).

I’ve grouped these into general categories, starting with food-related terms, since family gatherings tend to center around the kitchen. Next are the cinematic references my family is so fond of. The last section comprises the truly weirdest utterances, many of which celebrate important bits of family history dating back decades.