“Don’t smile until February.” These are words of wisdom I heard recently from a third-grade teacher, on how to maintain order in the classroom. But these words could just as easily apply to a winter workout regimen. Staying fit just isn’t as much fun when the cold, dark, and rain send us inside.

Almost seven years ago in these pages, I started a series on what music I recommend for indoor workouts. The tedium of riding rollers or a trainer requires a meticulously curated collection, or “megamix,” of fast-paced, hard driving rock or rap songs. (Do you also need a great playlist for brisk walking or running on that treadmill you bought during the pandemic? Of course.)

I don’t discover new music as quickly as Gen-Z does, but I have added a lot to my collection over the years, and now have many more tracks to recommend. (This makes even more sense now than it did seven years ago, because now everyone has Spotify and doesn’t have to buy or borrow CDs.) And so, here are my current recommendations, along with “liner notes” (a more metaphorical concept than ever, since so many young listeners have never seen a record jacket liner). 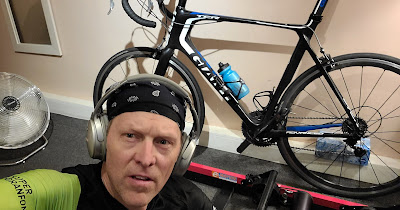 I discovered this song, and this artist, through one of those YouTube algorithms. It figured since I like M.I.A. videos, I’d like this video too, and put it into my feed. Well, the algorithm wasn’t wrong. The video is fun and funny, and I dig the song too. It’s perfect for riding rollers. (But I’m still not a big fan of these algorithms.)

My daughter turned me on to this one. As with “212” above, I cannot figure out what the singer is even talking about. The song seems political and probably relates to current events, which it’d be easy enough to google, but none of that matters to me. As has been observed by the philosopher Rakim, “It’s just the beat, the beat, the beat.”

I really like M.I.A. and lots of her songs have made my workout megamix, but I have to admit, I like each album a little less than the one before it. This is my favorite song from her fifth album, AIM, from 2016. And if you have a giant plasma TV in your home gym, be sure to check out the video too. It’s pretty awesome … possibly more extras than I’ve even seen in a music video.

YBN Cordae, according to Wikipedia, is “known mononymously as Cordae.” What? You don’t know this word, “mononymous”? I didn’t either. It means having only one name. But of course that’s not the case with this musician, unless you decide to call him Cordae. I mean, you could as easily say I’m known mononymously as Dana, except that I’m not known. Now, I don’t know much about Cordae except he got his start doing a remix of “My Name Is” by Eminem. How does a rapper whose name isn’t Slim Shady or Eminem make a name for himself doing a remix of “My Name Is”? Are you as confused as I am? Well, who cares. This is another song my daughter turned me on to, and you can totally pedal to it.

This is a cover of the Hole song. If you’re reading this post out loud to somebody, you’re going to have to pause here and explain it’s H-O-L-E, not W-H-O-L-E. Anyhow, I was never crazy about the original version of this song, but the vocals in this cover take it up a notch. Solid.

This one starts off with a dude telling a story, and he does a pretty funny imitation of a white cop saying sternly, “All right you kids, stop having so much fun. Move along.” This monologue goes on for about twenty seconds, which gives you a nice respite from all that hammering, as you just soft-pedal and listen, but then the song suddenly gets hard and fast and disturbing and dark. If you sync up your pedaling, you’ll start to really suffer, but you’ll go ahead and pour on the pace because you know the song is fairly short. Man. It’s a good one.

Down In It - Nine Inch Nails

You’re thinking “What? I thought this was new music albertnet is recommending!” No, just new to my workout megamix. This song is definitely old school. I can’t hear it without thinking of my old college roommate who, as described here, listened to this song constantly to the exclusion of all others. Nevertheless, it’s a good one and easy to dance—er, to work out—to.

I fricking love this song. It’s old-school at this point too, being from 1997, and though I was aware of it then, I only came to love it recently. (I was like that with avocados too … just really late learning to appreciate them.) The drumming on this in particular song is so good, I not only wish it were louder, but I wish I could be inside the drum while the song is being played. Alas, the Foo Fighters’ drummer, Taylor Hawkins, died this year, very suddenly. So it’s kind of sad to hear this song now, but mostly it’s just awesome.

Okay, this song is almost as old as I am. What’s it doing on this list? Well, I asked my older daughter to give me her top 10 workout songs, and this was one of them. I think it’s adorable how these youngsters somehow discover music this old, totally on their own somehow. I also tend to associate this song with El Freebird’s, the taqueria in Isla Vista where I won the Burrito World Championships, so it brings back good memories. And the song, though it picks up gradually and is super long, does freakin’ rock out eventually so it does totally belong in my megamix.

I read somewhere that Lana Del Rey was sued by Radiohead over this song, their claim being that it ripped off “Creep.” I couldn’t make out any resemblance at all and thought this seemed crazy. So with no preamble I played the song for my daughter and asked if it reminded her of anything. She replied, “I’m getting a pretty strong ‘Creep’ vibe from it.” OMG. I obviously know nothing about music. Clearly the ripoff (or tribute, if you want to prevaricate) was clear enough to my kid, and as described here, “The Guardian found that the chords used in ‘Creep’ were rare in pop music and that the melodies bore an ‘uncanny resemblance.’” But ignorant as I may be, I do know what I like, and this song is great. I was going to say something about the pacing of it, along with that of other songs, but I can’t remember my point. Suffice to say, virtually all the songs in this megamix can be synced with your pedaling, at one cadence or another, and the variety helps since sometimes ya wanna spin, and sometimes ya wanna get out of the saddle and mosh.

There seems to be a tendency among music critics to be hard on Eminem and suggest he’s washed up. This is the clearest example of incompetence I have ever seen. Not to sound like a troll or anything , but anyone who bags on Eminem is just an idiot, and the critics need to evaluate how far they’ve drifted from actual listeners, considering Eminem’s last eleven albums have hit number one on the US charts. This guy is amazing—he just gets better and better. If I gave him his due on this list of killer workout tracks, his songs would dominate and the whole post would look like an ad.  Godzilla is a lot of fun, has perfect energy for hammering your ass off, and even set a new record for speed: 10.65 syllables per second. The video is a hoot as well. You should definitely add the following tracks to your mix, too: No Regrets, Yah Yah, I Will, Gnat, No Regrets, The Ringer, and Darkness. Oh, and just about all his other songs, too.

I thought I could cram all my new recommendations into a single post, but you lucked out: I’ve run out of space (or more to the point, you’ve run out of patience). Next week I’ll cover the rest of my modern megamix. I’ll also include, as an appendix, my entire workout song list, comprising over 200 tracks. Watch for it!