I originally created this index as part of a post celebrating the fifth anniversary of albertnet.  You can read that post farther down the page, after the index.  It presents a discussion of site navigation, categorization schemes, pageview rankings, and a photo of my little kids holding celebratory balloons.

Here’s how this index is set up:  I have posts listed in chronological order within various categories I decided were useful.  The category list appears first, so if you see a category that interests you, you can hit Ctrl-F and search on it.

The categories
Within these lists of posts, each item is (of course) a link to the post itself.  Within each category, the posts are listed in chronological order (newest at the top), except the most popular, which are listed in order of popularity (most popular at the top).

As I continue adding posts to this blog, I’ll list them here, in whatever category list(s) they seem to fit, to keep this index current.  If you think I’ve mis-categorized or forgotten anything, e-mail me and let me know … after all, I’m all too human, and putting together this index was more work than I’d expected.  Also, the title of this post is a bit of a misnomer as it will often be incomplete.  It’s hard to keep up!

In closing , I shall quote my favorite Thai waiter:  “Enjoy please enjoy.”

Well, a milestone came and went recently that I forgot to notice:  the fifth anniversary of albertnet!  I probably should have celebrated by putting up crepe paper and balloons and giving my readers free food, or at least a big discount.  But this is only a blog and it’s free, so (as I often tell my kids) you’ll get nothing, and like it.

Okay, fine, here are some balloons: 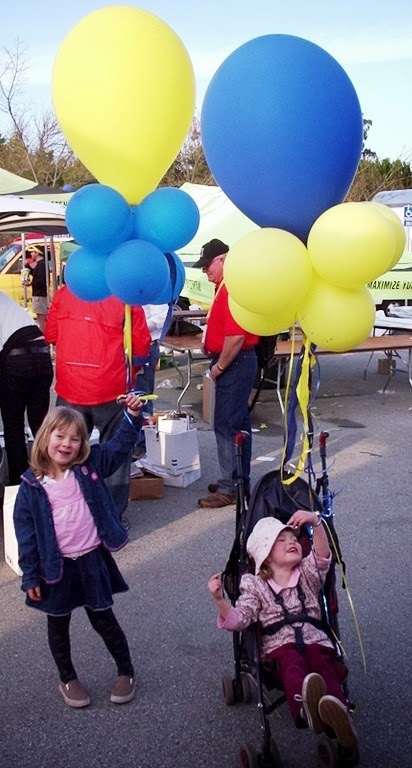 It did occur to me that I could use this occasion to finally undertake a project I’ve long considered worthwhile:  creating an index of albertnet posts.  Read on for a discussion of site navigation, categorization schemes, pageview rankings, and of course for the index itself.  (If you’re not interested in the asides and just want to see the index, scroll down until you see “The categories” in a big bold font, and go from there.)

In Google’s perfect world, everybody would have a personal Blogger page and would go to his or her Reading List (aka “dashboard”) regularly to keep up on all the blogs that he or she is following.  That way,  you’d never miss a post.  But I don’t think very many people ever do this.  (I myself seldom do, because it’s too depressing:  of the six blogs I follow, five have ground to a halt so it’s like looking at the obituaries of these blogs.)

You can always go to the albertnet home page, but of course most of my posts (~98%) are obscured by a tidy little file tree structure that you can’t be bothered with.  How can I expect people to browse this blog when there’s lower lying fruit, like channel surfing, all around us?

One hypothetically useful navigational tool is the support of tags, aka labels, on each post.  What?  You’ve never seen these?  They’re at the bottom of each post, along with the handy “Reaction” check-boxes that you also never noticed:

All you have to do is click on one of the labels, and Blogger will automatically search for other albertnet posts on that topic.  The only problem is, it doesn’t give you a list of posts.  It just barfs the posts themselves up on the screen, one after another, with the newest post at the top.  This isn’t nearly as useful as a Google-style search results screen would be.  (It’s kind of amazing Google hasn’t imposed its search-result uniformity on its Blogger sites.)  Also, the results list only shows a few posts; to see the rest, you have to go all the way to the end and click “Older Posts.”  A piece of advice:  don’t waste your time with these labels.

But guess what?  There’s also a little search bar at the top of the albertnet screen where you can type anything you want, and Blogger will search on that keyword within albertnet.  It’s just above the masthead, to the left:

The only problem is, this doesn’t work very well either.  You still don’t get a nice list of posts that you could choose from as from a menu.  It’s more like a prix-fixe meal:  one post spooling after another, as before.  It’s basically useless.

So how does anybody find anything on my blog?  Well, usually they don’t.  Sometimes somebody Googles “albertnet” plus something else; for example, I see a recent search on “albertnet race rwport.”  [Sic.]  But I think mostly I have first-time readers stumbling on my blog with random Google searches.

(Or maybe not so random.  I see, for this past week, the following thematically linked searches that had lead to albertnet pageviews:
In fact, albertnet carries the honor of being the first search result when you Google “california vasectomy law.”)

So, my big celebration of five years of albertnet is to give you loyal albertnet readers a way to easily find past posts.  But first I had to figure out how to categorize them—no easy feat given the almost random nature of my blog topics.

The easiest category to come up with was the most popular, based on pageviews.  Of course I have to take the pageview count with a grain of salt; probably a lot of pageviews are fraudsters poking around the Internet for whatever vulnerability they can find.  There’s also no way to know whether somebody reads a post once he’s gotten to it.  But I do believe that the posts with the most pageviews are the ones readers share with others.  (I can see a post “tip” from time to time.)  So I’ll include a list of the top ten posts as of today.

Note that if you’re supposing these ten top posts are the only ones you should check out, you should think again.  First of all, this list is biased in favor of older posts, since the longer a post has been out there, the more pageviews it will scoop up.  Also, this list is based on March, 2014; if you’re reading this long after that, this top-ten list is outdated (though I’ll be adding posts to the main index going forward).  Meanwhile, these ten top posts combined comprise less than 20% of total pageviews, so they’re not exactly runaway favorites.  In case you’re curious, here’s the breakdown as of March 8, 2014 (when I originally created this index): 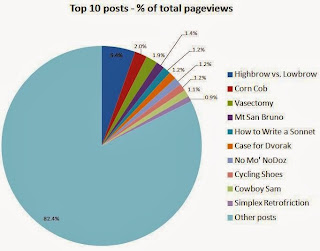 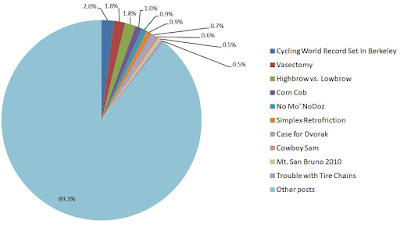 (Should I take a hint from my pageviews and try to tailor my posts to my perceived audience, to increase the popularity of my blog?  No.  First of all, I refuse to cater to the whims of an unknown and possibly hypothetical audience.  Plus, there’s no single category into which the top ten posts currently fall.  Finally, I’ve decided it’s impossible to predict what people will like no matter what metrics are used.)

Some posts simply defy categorization, like The Lotion Sniper, Mud Bath, and Bride Of “Pink Floyd The Wall.” Watch this space, because I’m planning to add a “Bits and Bobs” section to catch these oddball posts.

Many posts fit within more than one category.  Some topics, like cycling, are too general to comprise a single category.  But I’ve managed to cobble together categories that I think will be useful and representative.